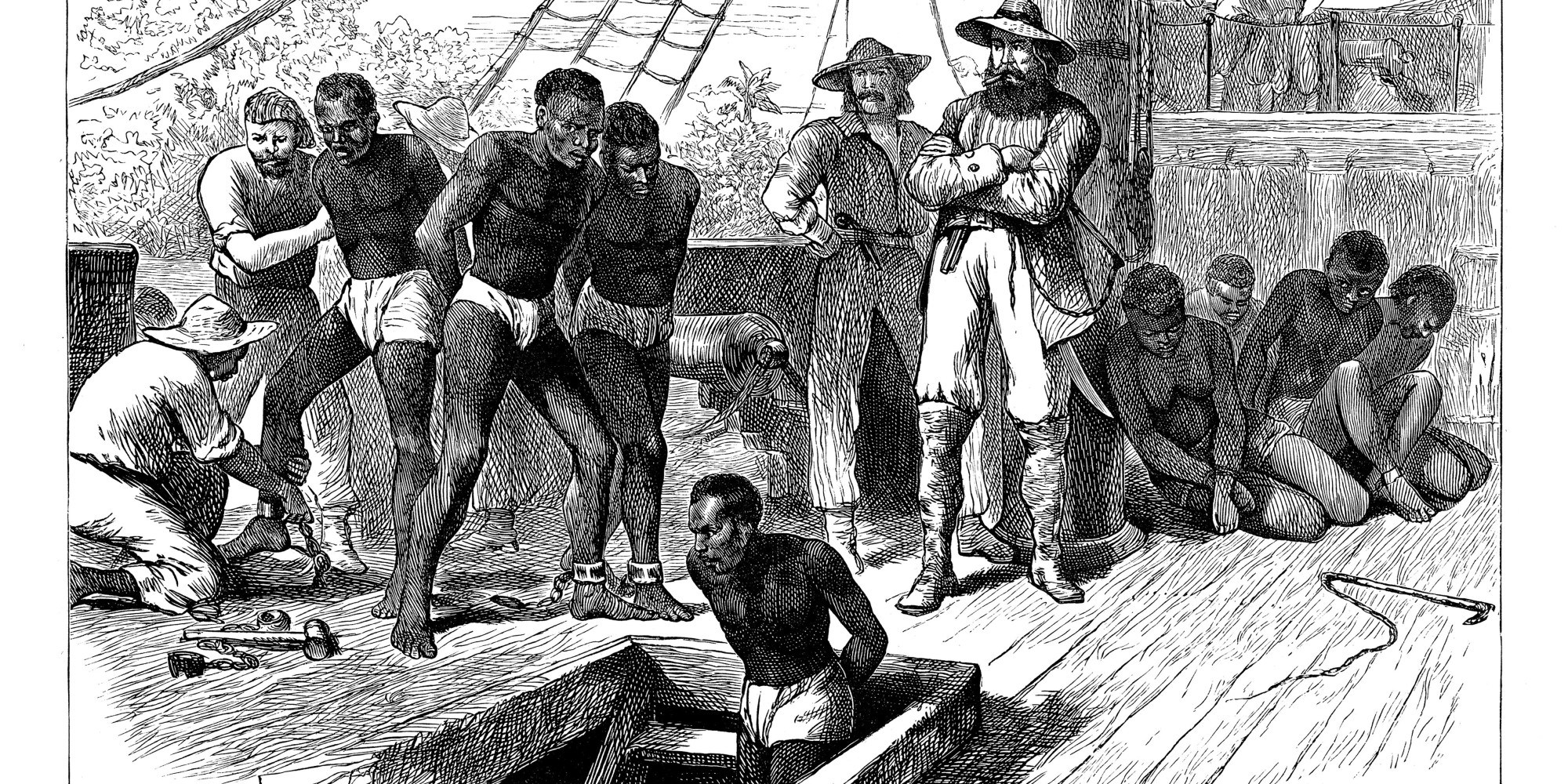 African Slaves Were Not ‘Immigrants’: Reminders from the Transatlantic Slave Trade

Dr. Ben Carson got off to a stumbling start as the Secretary of the Department of Housing and Urban Development. In front of a room full of federal staff workers, Carson seemed to categorize African slaves as immigrants. Speaking of America as the land of opportunity he said, “There were other immigrants who came in the bottom of slave ships, who worked even longer, even harder, for less, but they too had a dream that one day their sons, daughters, grandsons, granddaughters, great grandsons, great granddaughters might pursue prosperity and happiness in this land.”

In the fairest reading, Dr. Carson suggested that African slaves endured unimaginable hardship to carve out a life for themselves and their descendants. He later posted a clarification of his comments on his Facebook page.

But the juxtaposition of immigrants and slaves diminishes the horror of slavery. The main difference between the two groups is volition. Whatever their specific circumstances, an immigrant chooses to leave one country and go to another. Slaves didn’t have a choice they had chains. They were in bondage from one continent to another and often died that way, too. However much progress people of African descent in America have made, their forced relocation must never be forgotten.

To remind us of the involuntary nature of race-based chattel slavery and the atrocities it produced, I assembled a few descriptions of the transatlantic slave trade. They begin on the coast of Africa, continue during the infamous “Middle Passage”, and end with the sale of human beings in the West Indies or North America.

Saltwater Slavery: A Middle Passage from Africa to American Diaspora by Stephanie Smallwood

The valuation of human bodies began at the edge of the sea in Africa. Slave ship captains attempted to maximize their profit by packing as many Africans into the cargo hold as possible. Stephanie Smallwood depicts the macabre market logic below…

“As shipping costs were the greatest part of the price of goods transported to overseas markets in the Atlantic world, maritime trade proved commercially viable only to the extent that it was possible to compensate for those costs. Opportunities to buy people cheaply on the African coast contributed one part to the slave trade equation. Achieving unprecedented economies of scale contributed another: crowded ships “translated into large savings based on the number of migrants carried per ton of the vessel.” In fact, European migrants would have been less costly to transport than Africans if ships carrying Europeans had been as crowded as slaving vessels. For this reason, David Eltis has insisted that “from the strictly economic standpoint there were strong arguments in support of using European rather than African slave labor.”

“Slaves became, for the purpose of transatlantic shipment, mere physical units that could be arranged and molded at will-whether folded together spoonlike in rows or flattened side by side in a plane. Because human beings were treated as inanimate objects, the number of bodies stowed aboard a ship was limited only by the physical dimensions and configuration of those bodies. ‘Transportation history provides no parallel,’ writes David Eltis, ‘to the transatlantic slave ship.’”

One of the earliest slave narratives comes down to us through the pen of a man named Olaudah Equiano (or Gustavus Vassa). He recollects being captured by slavers in Africa and being forcibly separated from his beloved sister. He lays down in stomach-churning detail the conditions on the slave ship during their transatlantic voyage to the Americas…

“The next day proved a day of greater sorrow than I had yet experienced; for my sister and I were then separated, while we lay clasped in each other’s arms. It was in vain that we besought them not to part us; she was torn from me, and immediately carried away, while I was left in a state of distraction not to be described. I cried and grieved continually; and for several days I did not eat any thing but what they forced into my mouth.”

“The stench of the hold while were were on the coast was so intolerably loathsome, that it was dangerous to remain there for any time, and some of us had been permitted to stay on the deck for the fresh air; but now that the whole ship’s cargo were confined together, it became absolutely pestilential. The closeness of the place, and the heat of the climate added to the number in the ship, which was so crowded that each had scarcely room to turn himself, almost suffocated us. This produced copious perspirations, from a variety of loathsome smells, and brought on a sickness among the slaves of which many died, thus falling victims to the improvident avarice, as I may call it, of their purchasers. The wretched situation was again aggravated by the galling of the chains, now become insupportable; and the file of the necessary tubs, into which the children often fell, and were almost suffocated. The shrieks of the omen, and the groans of the dying, rendered the whole scene of horror almost inconceivable.”

While the Middle Passage gets most of the attention, the slaves’ forced movements didn’t end at first landfall across the ocean. Traders carried Africans from port-to-port looking for the highest bidder. This meant more exposure to disease and malnutrition as well as further isolation through separation from relatives or tribal relations…

“Time and again, African captives climbed off the vessels that carried them from Africa to Jamaica or Dominica or South Carolina, only to be forced aboard a schooner that whisked them away again to North Carolina or Martinique or Cartagena. Studies of the Atlantic slave trade highlight the infamous Middle Passage, the forced crossing of the Atlantic, concluding the story with a sale of captives in the American port where the ocean crossing ended. Implicit in that choice of endpoint is an assumption that plantation owners—and others eager to exploit enslaved labor—were the buyers of enslaved people after the Atlantic crossing. But another type of buyer prowled the sales of recently arrived Africans in early America: one seeking captives to exploit, not as laborers, but as commodities. Trading between American colonies, these speculators monitored the prices for people in various ports and forged commercial connections across imperial borders. When opportunities arose, they pounced, buying newly arrived captives in one port, forcing them back aboard ships to another colony, and selling them all over again. For the traders, such dealings opened myriad economic possibilities because enslaved workers were among the most coveted assets in the colonial Americas. For the captives, such speculative endeavors meant that their forced migrations often continued after the transatlantic voyage. This intercolonial trafficking—its scale and reasons for existence, the strategies of the traders, its importance to imperial rivalries, its connections to broader commerce, and the final passages it entailed for African captives—is the subject of this book.”

Soul by Soul: Life inside the Antebellum Slave Market by Walter Johnson

At the decrepit heart of the African slave trade was the chattel principle. The impossible process of transmuting a human being into a commodity made slavery into an economic science that maximized both profit for the slave owner and misery for the slave. Walter Johnson focuses on the slave market, the exact point-of-sale, to illustrate the dehumanization of persons…

“The being of slavery, its soul and its body, lives and moves in the chattel principle, the property principle, the bill of sale principle: the cart-whip, starvation, and nakedness are its inevitable consequences.”—James W.C. Pennington, The Fugitive Blacksmith

“Traders began to package their slaves for market before they ever reached the slave pens. As they neared their destination, the traders removed the heavy chains and galling cuffs from their slaves’ arms and legs and allowed the slaves to wash and rest and heal. The traders shaved men’s beards and combed their hair, they plucked gray hairs or blackened them with dye—the ‘blacking’ that appears in their account books was perhaps intended for this purpose. Slave trader John White was clearer about what he did with he tallow he bought: it was ‘for the girls’ hair.’ The ritual of preparation continued once slaves had reached the market. In the slave pens the traders increased rations of bacon, milk, and butter, a fattening diet one trader referred to as ‘feeding up.’ To keep the slaves’ muscles toned, the traders set them to dancing and exercising, and to make their skin shine with the appearance of health, the traders greased the slaves’ faces with ‘sweet oil’ or washed them in ‘greasy water.’”

“The daily routine of the slave pens—the preparations, the examinations, and the constant contingency of being for sale to anyone who cared to buy—alienated slaves from their own bodies. William Wells Brown conveyed this experience with the image of slaves forced to dance to a merry fiddle while ‘their cheeks were wet with tears.’ For Brown, those tears marked the distance between two selves, one outwardly presented by the traders and one inwardly preserved by the slaves.”

Americans must always guard against sanitizing the African slave trade. As the years roll by and the chronological distance between contemporary society and the antebellum economy increases, we tend to forget. We forget the commodification of human bodies. We forget the dehumanization of people in the image of God. We forget the suffering and tragedy. We forget that greed motivated slave traders to force people into bondage by the millions. Never forget.

10 thoughts on “African Slaves Were Not ‘Immigrants’: Reminders from the Transatlantic Slave Trade”