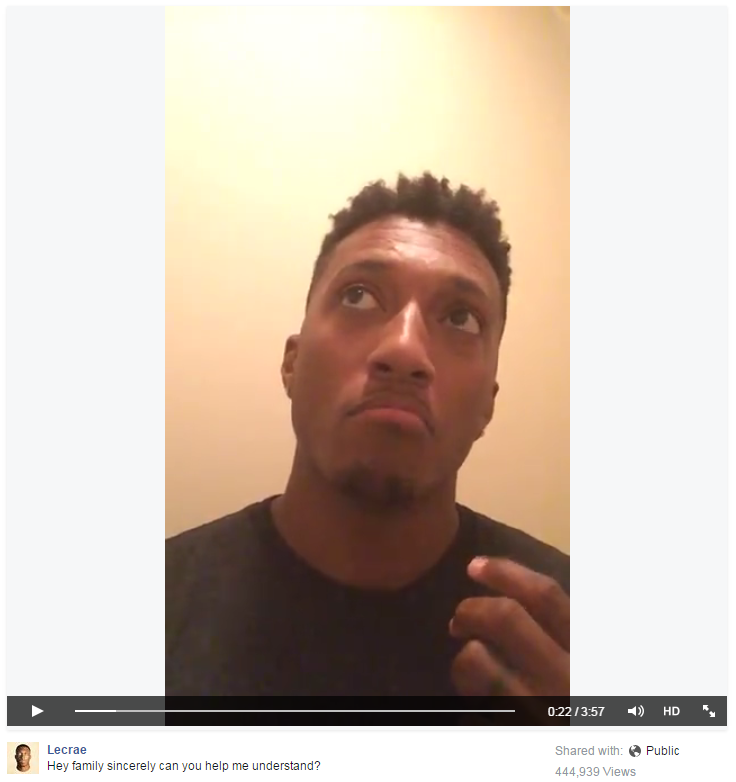 Amidst Racial Tensions, Lecrae Asks, “Can You Help Me Understand?”

If you think America is post-racial, just wait about seven days and you will have cause to re-evaluate that claim. Instances of racial violence perpetrated against African Americans have become nearly a weekly occurrence. This time the place is Cincinnati and the person is Sam DuBose.

A body cam video shows Officer Ray Tensing stopping 43 year-old DuBose for not having a front license plate. Less than five minutes later, DuBose was dead with a gunshot to the head from Tensing. The officer has been indicted for the killing, but the event has sparked a new round of conversations regarding race and violence in America.

Two-time Grammy award winning hip hop artist, Lecrae Moore, took to Facebook to post a video about his confusion over Christian responses to racially-charged instances of injustice like Sam DuBose’s murder. “I need a little help. I sincerely want to understand something and I want to understand the sentiment behind a lot of what I’m seeing out there,” began Lecrae.

Hey family sincerely can you help me understand?

The artist goes on to explain, “So I have historically posted things about abortion and Planned Parenthood and my thoughts on that…I’ve talked about ISIS and the terror that is ISIS…In both of those circumstances I have received encouragement…specifically from my white brothers and sisters. But yet when I’ve spoken out recently about what I see to be either authoritative or racial injustice, there’s this sentiment of what feels like hostility…or defensiveness.”

Is it possible to openly advocate for one issue of biblical morality without being accused of not caring about other issues? Can Christians who are passionate about abortion and Christian persecution be just as passionate about racial injustice? Why does it seem like the people who say, “What about life in the womb and Christian suffering worldwide?” have trouble saying, “What about race in America?”

Lecrae’s question resonates with thousands. As of the posting of this article his video has received 15.1K “Likes”, 3.5K comments, and has been viewed almost 450,000 times on Facebook. My experience in racial conversations has been similar to Lecrae’s. When I’ve spoken about persisting racial injustice many Christians, particularly white brothers and sisters, seem to steer the conversation away from race by bringing up other issues of public justice.

I can’t speak for others, but for me, I have to be vocal about issues of race because they affect me in a way other issues don’t. As an African American, race is a daily lived experience for me. Even when I’d like to move past skin color, the world reminds me in countless ways that I am “other.” Whether it’s the acute awareness of how my clothes may render me “respectable” or a “thug” in some people’s eyes, or the constant fear of interacting with the police knowing that the wrong motion or words could be fatal, or the paucity of minority theologians and leaders highlighted in my seminary courses, being Black in America is a pervasive reality.

I talk about race because I can’t escape it. I can’t live in this country and fail to be affected by the death of Sam DuBose. His murder is a gut-punch because I or someone close to me could be in that situation. The Emanuel A.M.E. church, where a shooter left nine people dead, reminds me of every historic Black congregation in which I’ve ever worshiped. I can’t even buy a hoodie from my alma mater for fear others might think I’m walking in the “wrong” neighborhood for someone of my skin color.

Lecrae captures my thoughts more eloquently when he says, “I personally do not feel that I give more sway to one thing over the other intentionally. I think I’m human…As an African American male obviously that’s the experience and the paradigm that I see things through, so those things are going to probably affect me a little more than they would affect somebody who’s not a part of the Black community.”

Outrage Over One Injustice Doesn’t Cancel Outrage for Others

Yet my concern for race does not preclude a concern for other issues of biblical justice. I abhor abortion, and even more so because it disproportionately affects Blacks (I have written about that here). I pray constantly for my brothers and sisters across the world, particularly in the Middle East, who are being evicted, taxed, raped, and beheaded for claiming the name of Christ. I, too, like every other Christian fervently pray, “Thy kingdom come, thy will be done.”

I hope my emphasis on race can be understood by those in the majority. I can’t get away from it. Racial issues affect me not only daily, but perpetually. Then, when another video like the one of Sam DuBose comes out, I have yet another occasion to speak about racial injustice. All Christians, in fact, have the opportunity to stand for the unity in the midst of diversity the Bible teaches. Instead of accusing each other of not caring for this issue or that issue, perhaps we can weep with those who weep. Maybe we can walk with one another through the valley of suffering. Perhaps we can be co-laborers for the kingdom.

One day God will eliminate every injustice. He will redeem all of our pain. He will wipe every tear from our eyes and death will be no more (Revelation 21:4). Until that day, I lament racial injustice. I lament abortion. I lament Christian persecution. And I stand with anyone who will cry out to God, “Maranatha! Come, Lord Jesus!”

In the meantime, I want to continue the discussion Lecrae started. For those, especially in the racial majority, who have insights into why some Christians reflexively get defensive about race or try to deflect the conversation, what’s behind that? Why do some more readily talk about almost any other issue than about race?

But let’s be gracious as we address these questions. As brother Lecrae concludes, “I’m interested in understanding the sentiment behind that because I think it causes a lot of frustration, a lot of division. And I’m all about unity. I’m all about us figuring out, ‘Hey, how can we work together?'” Come, let us reason together.

Previous Post
Christian, Pro-Life, and Black: Advocating for ALL of Life
Next Post
Pass The Mic: Doctrines Of Grace

22 thoughts on “Amidst Racial Tensions, Lecrae Asks, “Can You Help Me Understand?””