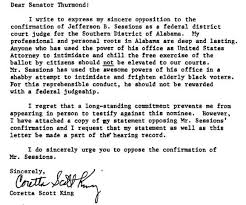 The Bad Optics of White Male Domination in the US Senate

Another controversy has erupted in the US government regarding gender, race, and white male domination. Senator Elizabeth Warren (a white woman from Massachusetts) was silenced by Senator Majority Leader Mitch McConnell (a white man from Kentucky) in the US Senate for reading a letter from a black civil rights icon Coretta Scott King, opposing Jeff Sessions’ nomination for a federal judgeship nearly 30 years ago,

Senator Warren cited the letter in opposition to Sessions’ nomination as Donald Trump’s attorney general. The letter supports (Warren argued) that Sessions has used his power of office to impede “the vote of black citizens in the same state he sought to serve as a federal judge.” As Senator Warren read this letter, Senator McConnell shouted Senator Warren down, evoking Rule 19. Rule 19 is a chamber regulation prohibiting senators from personally attacking one another.

This recent controversy is one of the many recent instances on race and gender of the Republican Party in recent years. No one knows the intent of Senator McConnell’s heart. But the optics are bad for the Republicans. A white Republican man from Kentucky with a southern accent shuts up a white Democratic woman from Massachusetts while she was reading a letter written by a black civil rights icon Coretta Scott King—Dr. Martin Luther King, Jr.’s wife—opposing Sessions’ nomination for a judgeship in Alabama due to allegations of racist voter suppression of black people in the south.

Regardless of the outcome of Sessions’ nomination, Republicans may have offered another optic to some black and brown people, and to some women whether the Republican party is for them.