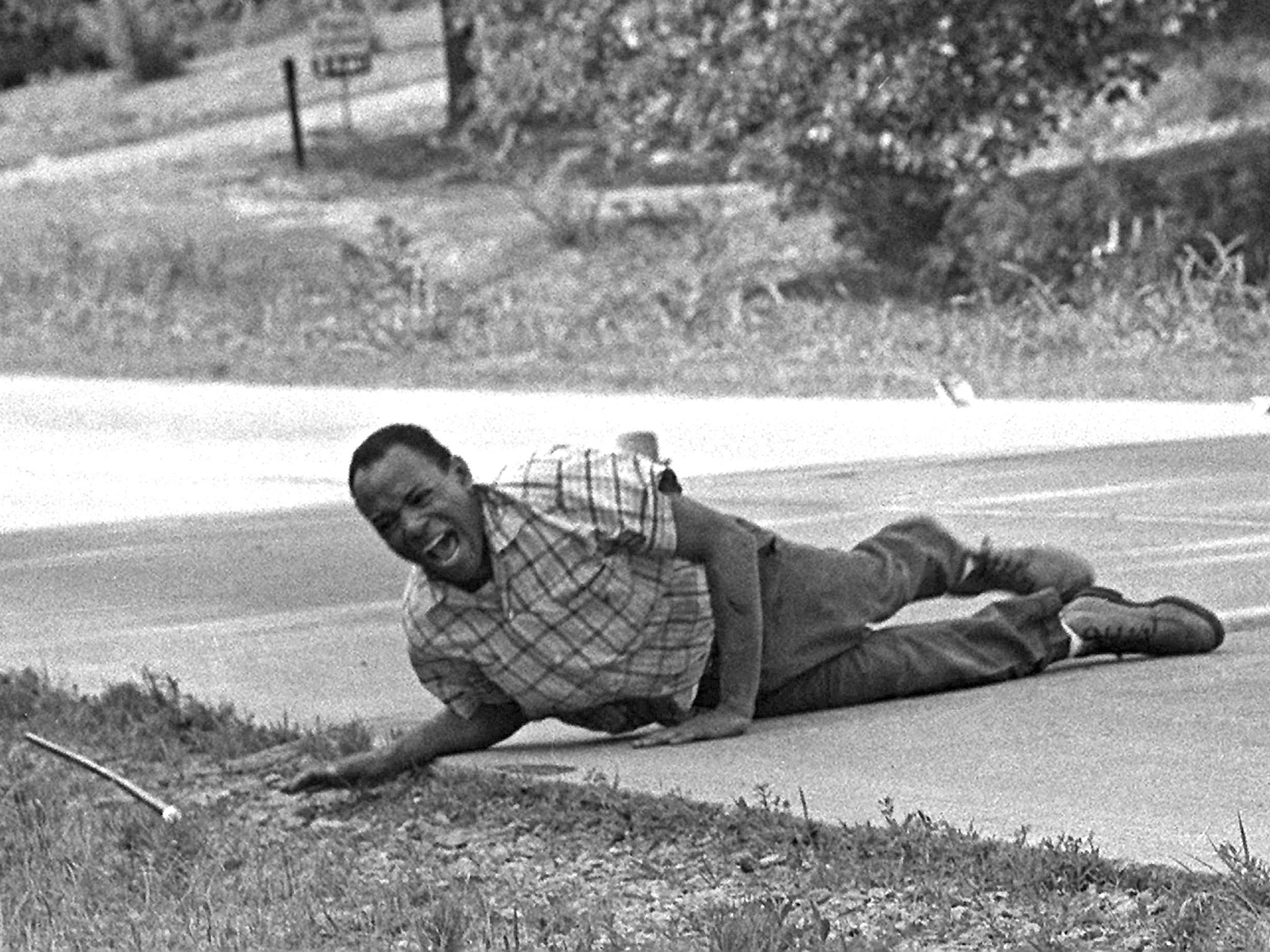 The Bible or the Bullet: James Meredith and the March Against Fear

James Meredith has always been his own man. You have to be if you’re going to be the first black student at the University of Mississippi. In 1962, Meredith integrated that bastion of white supremacy in the South. White rioters spent the night in bloodshed and destruction that left two people dead. Nevertheless, Meredith graduated a year later. But that was then.

Rebels: James Meredith & the Integration of Ole Miss from The Southern Documentary Project on Vimeo.

In 1966, Meredith embarked on another crusade and it nearly cost him his life.

Meredith had planned an atypical march for civil rights. It was unusual because he was going to walk from Memphis, Tennessee to Jackson, Mississippi all by himself. According to historian Aram Goudsouzian in his book, Down to the Crossroads, the purpose of the march was to, “challenge that all pervasive fear that dominates the day to day life of the Negro,” and to, “encourage the 450,000 unregistered Negroes in Mississippi to go to the polls and register.”

On the second day of the March, June 6, 1966, Meredith crossed the state line in Mississippi and a white man with a shotgun shouted, “James, look out!” and then pulled the trigger.

But when he started walking he chose the Bible. Goudsouzian explains Meredith’s reasoning.

“The night before he started, he contemplated whether to carry a Bible or a gun. The choice was fraught with political symbolism. The gun reinforced his bedrock faith in self-reliant manhood—if a man was conquering fear, a man should protect himself. But Meredith also believed that an American citizen deserved the protection of the American government when exercising a basic American right. And if he wanted broad support, then he needed to appeal to the public’s better instincts. Civil rights and Christian righteousness had fused in the public imagination, thanks to Martin Luther King and his kind. So Meredith made a choice that he later called ‘calculated propaganda.’ He brought the Bible.”

But in the moments after white supremacy buried buckshot in his body, Meredith wondered whether he should have brought a gun. “I’m sorry I didn’t have something to take care of that man. I’ll never make that mistake again,” he reflected.

Meredith survived the assassination attempt. The type of bullets, no. 4 birdshot, spread out and caused a number of wounds, but none proved life-threatening.

What the gunshot actually did was bring national attention to what started as a one-man march.

Within days all the most prominent leaders of the Civil Rights movement had issued statements and converged on Mississippi to join the Meredith “March Against Fear.” Floyd McKissick of CORE, Martin Luther King, Jr. of the SCLC, Stokely Carmichael of SNCC, and even entertainers like Dick Gregory headed south to resume the march while Meredith convalesced.

In what some have called “the last great march of the Civil Rights movement,” the March Against Fear embodies the tension between non-violent direct action and armed self-defense as protest tactics. While Meredith ultimately chose the way of non-violence, many others shared his ambivalence.

They asked, “Why shouldn’t black people protect themselves against the murderous brutality of white supremacists? Why should they meet dogs, firehoses, tear gas, and guns with choruses of ‘We shall overcome?’”

Stokely Carmichael gave voice to the growing frustrations of black people who were dissatisfied at the pyrrhic victories of the Civil Rights movement thus far. After a particularly brutal encounter with the police in which he was arrested Carmichael popularized (although he didn’t coin) the phrase, “Black power.”

“The only way to stop them white men from whuppin’ us is to take over. We been saying freedom for six years and we ain’t got nothin’. What we got to start saying now is Black Power!” Carmichael shouted.

The friction between the Bible and the bullet is the friction between moral suasion and militancy. Non-violent direct action was a tactic designed to stir up a sense of indignation in the nation. It posited a degree of virtue in most people that would lead them to express outrage at the injustice African Americans daily endured. The principle of non-violence often relied on biblical teachings about forgiveness and the power of suffering wrong for doing right.

“this is a movement of passive resistance, depending on moral and spiritual forces. We, the oppressed, have no hate in our hearts for the oppressors, but we are, nevertheless, determined to resist until the cause of justice triumphs.”

Black Power sought to enfranchise of people of color through asserting their right to defend themselves as full human beings and citizens. It promoted a more self-conscious blackness that didn’t rely on the largesse of whites. Whether white people wanted to change or not, black people had the ability, even the duty, to grasp their own dignity and seize their own opportunities.

As Carmichael expressed it when a reporter asked him, “I also realize that nonviolence in this country is not asking the white community in the South to be nonviolent, and that, in a sense, is giving them a free license to shoot us at will.”

The discussion about the Bible and the bullet should emphasize the commonality of the two stances. Both aim for black empowerment and a more equitable society. One approach draws out the unrighteousness of the oppressor to demonstrate the righteousness of the oppressed. The other approach grasps the right to insist on black dignity and self-defense if that dignity is assaulted.

Self-defense and non-violence, or the Bible and the bullet, are not completely at odds.

Dignity, militancy, and assertiveness are necessary to both methods. But it is hard to talk about them both at the same time. As long as the struggle for civil rights continues (and it is a journey not a destination), then activists will continue to weigh the merits of various principles and practices.

James Meredith and the March Against Fear reminds people in the present that the activists in the Civil Rights movement were not uniformly nonviolent. As long as African Americans and other marginalized people face violent repression, then violent retaliation in self-defense is an option for resistance.