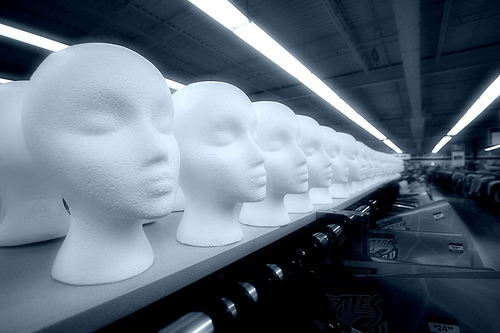 Many agree Americans live in a racialized society (a society that attributes certain characteristics to groups of people for the purpose of racial hierarchy and racism), that we live in a country whose national origins cannot be separated from the evil ideology of white superiority and black inferiority, and that the U.S. still (in many respects) privileges whiteness over non-whiteness. But other Americans believe and embrace the color-blind theory of race.

The color-blind theory refers to racial neutrality. According to this view, the color of one’s skin does not matter because we live in a post-racial society—that is, a society that has moved beyond race. Further, the theory urges that humans need to look beyond skin color, because treating people equally and ignoring their race will lead to a more equal society.

Kimberlé Williams Crenshaw, legal scholar and critical race theorist, explained in a recent lecture at Brown University that the color-blind theory is an ideological frame that basically asserts that a person should treat all persons equally.

Critical race theory (CRT) challenges the color-blind theory of race. CRT is a complex theory that basically says racism is normal, not an abnormality, whiteness is privileged over non-whiteness, and race is a social construct (not biological) created by the majority group to wield power and privilege in favor of the white majority.[1]

As a black Christian scholar with some social privileges because of my educational background (4 degrees—B.S., two master degrees, and a Ph.D.) and because of my teaching position at a prominent evangelical seminary, I am tempted to say this theory on the surface seems to be biblical. After all, Gal. 3:28 states “There is neither Jew nor Greek, neither slave nor free, and neither male nor female, but we are all one in Christ.” Therefore, we should conclude, “There is no such thing as a black Christian or a white Christian. We’re just Christians.” And Christians should not see color and should stop talking about race; talking about race will make race an issue.

However, regardless of how pious the color-blind theory sounds to Christians, it is actually cruel and damaging to many black, brown, and white people who experience marginalized or privileged racialized experiences simply because of their skin color. And the color-blind theory of race perpetuates the very racism that it seeks to avoid by allowing the majority cultural group to maintain their status as the privileged, racialized group.

The color-blind theory of race denies the racialized experiences of those marginalized. The theory communicates to the marginalized races that their racialized narratives are false, because they don’t fit the counter-narratives of the majority group. However, the racist ideology of white superiority that created the historical impetus for slavery placed non-white people (particularly blacks) in a negative light from this country’s inception.

Black people were ripped apart from their families, enslaved, lynched, sprayed with water hoses, beaten with clubs, given separate bathrooms and water fountains, and were forced to live in a society where everything in their experience reminded them of their so-called inferiority to whites. Blacks also had to endure dehumanizing names like coon, nigger, or boy simply because their black bodies were not white, names that reinforced their racialized status of inferiority.

Elijah Anderson (an African-American sociologist at Yale University) recently affirmed the above point at a recent Veritas Forum at Yale University. Professor Anderson asserted that slavery and the iconic plantation established the black body at the very bottom of the American racial order, stating that even justices in the 1800s suggested that black people had no rights that white people were bound to respect.

With emancipation, Anderson continued, black people migrated to the north and south. But their racialized reputations as inferior to whites followed them. He declared the black body has historically moved to and fro in white spaces with a deficit of credibility, not because of any scientifically verifiable biological inferiority, but simply because the black person is not white.

Christian congregations that affirm the color-blind theory grossly fail those black and brown people who are marginalized in their communities and in their churches because of their racialized status. Black and brown (and white!) evangelicals suffer when they experience racialized forms of racism, even in evangelical spaces. Evangelical churches deepen racialized wounds when they suggest from their pulpits, in their classes, in their institutions, or in personal conversations that the suffering of black and brown people because of their race is not real, or the loving Jesus means we should be racially neutral and avoid discussions about race.

Contrary to certain evangelical Christians, critical race theorists and social scientists argue that racism is systemic, and is deeply ingrained in the structural fabric of the U.S. Ideas of racial hierarchy and white superiority and black inferiority have shaped the identity of this country. To clarify, this does not mean that every problem experienced by blacks results from racism, but the above does suggest that (like it or not) blacks, whites, and everyone else in this country live in a racialized society. Sometimes one’s racialized perception of others can serve as an advantage or disadvantage for the racialized group in social interactions and achievements. Take, for example, the way black and brown people are disproportionately incarcerated for certain crimes in comparison to white offenders.

In my experience, certain evangelicals will vehemently deny the above premise. Instead, they contend that to affirm systemic racism is to make race an issue, and when people affirm systemic racism this affirmation feeds into the grievance industry. With these assertions, however, there is a subtle interplay of meaning some white evangelicals attach to race. Some white (and a few black) evangelicals do not understand themselves to be a race or to be racialized, but as simply being normal people. They genuinely believe their viewpoint on race is “the truth,” as opposed to having a viewpoint shaped by one’s culture or race. This perspective allows some within the majority group to reinforce racialized stereotypes of non-white people, because they genuinely believe they interpret the world from the posture of objective truth, whereas non-whites interpret the world through a suspicious, ethnic posture.

When Christians deny they see black, brown, or white skin, they ignore the fact that many people have suffered much because of the color of their skin at the hands of some white people who identified with the Christian movement. And when Christians deny that skin color currently plays a role in determining one’s position and influence in the evangelical movement, they perpetuate the cruelty of racism in their churches, because they show their unwillingness to admit that racial identity often determines who has privilege and what privilege one has in the current evangelical movement and that one’s race often serves as a means of social marginalization.

Great progress has been made in evangelical churches. However, even greater racial progress in evangelical churches will be difficult if we continue to deny the obvious. Black, brown, white, and everyone else in between in the evangelical movement must acknowledge our differences, as well as the fictive racial construct that we’ve inherited, and we must pursue love, unity, and reconciliation in Christ through the Gospel in spite of what we think we see when we look at another person created in the image of God.