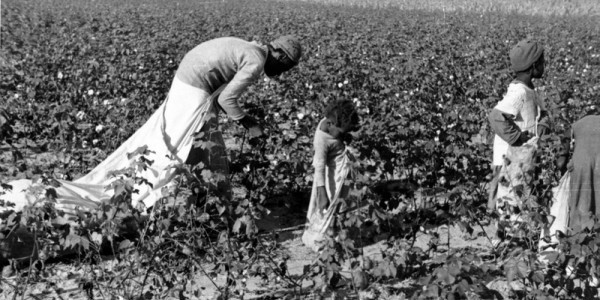 Driving Miss Daisy: A Conversation about Sharecropping, Racism, and the Gospel

Conversation with my wife’s grandmother, Daisy, had been cordial and mostly forgettable…until she started talking about her childhood as a sharecropper.

My wife, my son, me and Ms. Daisy had been driving in the car on our way back from Kansas City, Missouri after spending Easter with my in-laws.  A surge of wakefulness knocked me out of highway hypnosis as we entered the last two hours of our ten hour journey.  The flat plains of the Mississippi Delta melted into a blur as we whisked past soybean fields and one-stoplight towns like Transylvania, Sondheimer, and Talla Bena.

The Delta formed an appropriate setting as I asked Grandma Daisy, now in her eighth decade of life, about what it was like growing up in Vidalia, Louisiana, not far from where we were driving. At first she spoke with reticence, holding back a gush of details and memories.  ”It was hard for me coming up,” was all she said.

But I persisted.  Gently asking questions until her speech started to flow.  ”Did you have to pick cotton?  I’ve heard cotton bolls have hard, sharp spines.  Is that true?” I asked.

“Oh, yes, honey.  You would have to reach all the way into the boll to pull out the cotton and get scraped and poked the whole way.  And speed was the name of the game.  It was all about how much cotton you could pick in as little time as possible.  You didn’t have time to reach in there carefully.”

I pictured scarred, bloody, calloused hands–the stigmata of the African slave in America. I looked at her hands.  Smooth, delicate, a rich shade of nut-brown like the shell of a mature pecan so common in the South.  If she had scars none of them remained.  But not all wounds are carried on the outside.

“So how did sharecropping work? What was it like?” I probed.

“Well they called it “share” cropping, but you really didn’t share anything.  You’d grow as much as you could and you’d basically give everything to the ‘Boss Man,’” she explained.

“They had this little store on the plantation.  What did they call it?  Maybe the commissary.  Anyway, you could go there and get your flour, your sugar, your salt.  You know, things like that.  The Boss Man would ring it up for you and put it all on your tab.  At the end of the year he’d say you owe ‘this much.’  Some years you’d pick maybe $500 worth of cotton, and he’d come and say that’s how much you owed at the store.”  I glance at her face.  She’s frowning.  I figure she’s replaying the scene in her mind’s eye with HD clarity.

“Were your parents Christians?” I wondered.

“Oh yes. Especially my daddy.  He would never miss a church service.  And he made all us kids go.  We didn’t have a choice.  I remember thinking, ‘If I ever have kids, I’m not going to make them go to church.’ I was in high school.  There were other things I’d rather be doing. But my daddy made us go anyway.  He looked forward to it.”

“How did you believe Christianity?  This was the same religion the Boss Man professed and what some Blacks called the ‘White Man’s Religion.?’

“Oh, I never did buy into all that.  It wasn’t even a question.  That’s just the way things were. We didn’t think about it.”

“So how did you feel about the Boss Man and White people?”

“Oh, I hated them.  I really, really did.” She was frowning again, and shaking her head this time.

“I was mad at what they did to us.  I had to walk eight miles to school each way.  Rain, cold, hot, whatever.  The school bus used to pass us by.  We couldn’t ride it because we were Black.  Sometimes there’d be this big ‘ol bus and only two white children riding it.  The bus would pass by close enough to splash water on us, but they wouldn’t pick us up.”

The memories came faster now and she continued.  ”We used to walk by the White people’s houses.  The adults would be sitting on their porches drinking tea, or lemonade, or whatever.  Their kids were playing in the front yard and they’d let their kids throw rocks at us and curse us.  They didn’t say a thing.”

“I just wanted a machine gun.  I didn’t know what other kinds of weapons there were out there. All I knew was that a machine gun could shoot bullets fast and that’s what I wanted.”

I knew she had plenty of White friends now.  But I asked the question anyway, “How do you feel about White people now?”

“I don’t have any problems with them now.  It took a long time, but you’d be amazed at the people who I’m friends with and  who I let into my house.  Some of the White people I know have cared for me and loved me more than anyone else.”  She said this last statement with force.  She was a recent widow, and her mostly White church family had rallied around her.

“So, what changed? How did you stop hating them?”

Humility held back the details of Grandma Daisy’s story.  She didn’t talk much about finishing high school, going on to college, and later earning a Masters in education.  She refrained from telling many stories about being married to a man in the Air Force and living in Turkey and other places.

But she had said enough.  You could never tell what she’d been through by looking at her.  She has creases around her eyes from smiling so much.  Yet she had spent her childhood as a sharecropper.  A real life sharecropper, on a real life plantation, with a real life “Boss Man” in the South.  And for a few moments she invited me into her past to feel its pain and learn its lessons.

I looked out of the window at the Delta scenery that had been so cruel to a little Black girl growing up there.  Even in the second it was happening, I knew I’d never forget driving Ms. Daisy.

6 thoughts on “Driving Miss Daisy: A Conversation about Sharecropping, Racism, and the Gospel”