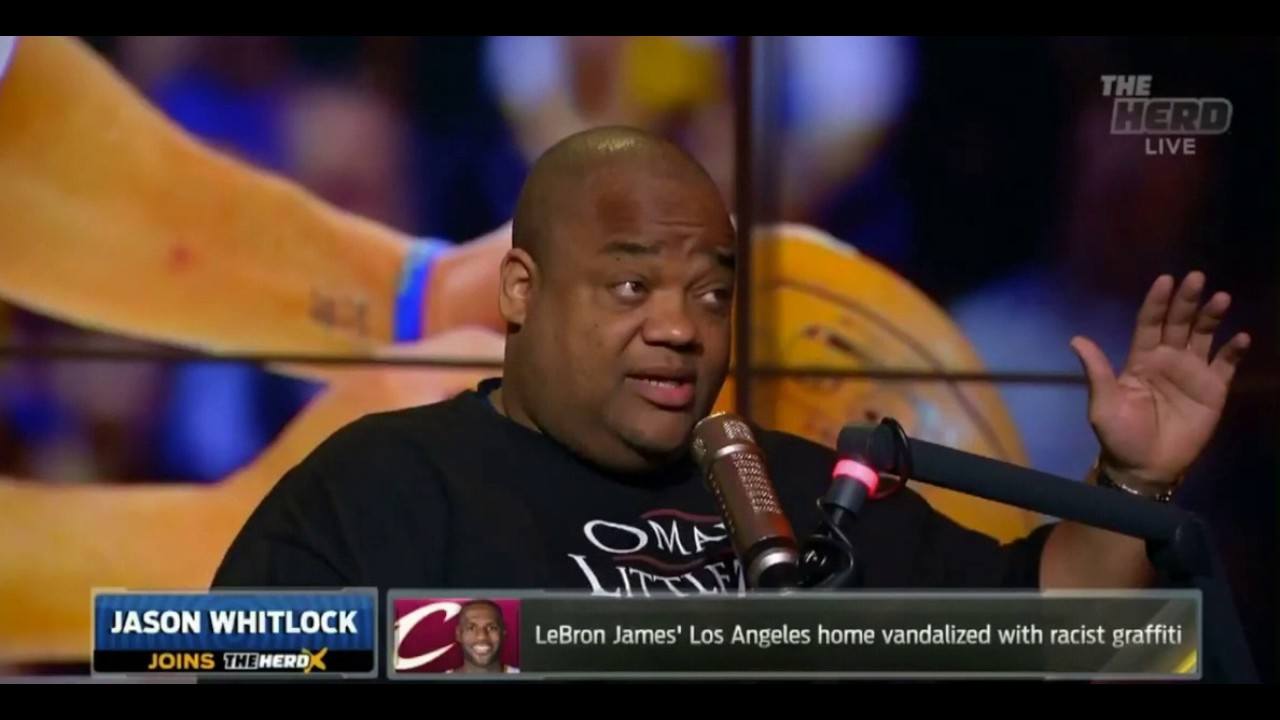 Someone spray-painted ni**er on the front gate of a home in Los Angeles belonging to LeBron James. In a moment of intentional vulnerability he let his feelings about the event be known before the watching world. Most people reacted to James’s situation with empathy. Not Jason Whitlock.

On a FoxSports 1 television show, Whitlock said that James was too rich to experience “real racism.” Some choice quotes from Whitlock…

“Racism is an issue in America but is primarily an issue for the poor. It’s not LeBron James’s issue. He has removed himself from the damages and the ravages of real racism.”

“LeBron to me here, is embracing his victimhood. That’s the type of racism that needs to be stamped out. This is an inconvenience for LeBron.”

“It’s not racism. It’s not being denied a job.”

No disrespect to him as a human being, but his views on this are detrimental to cross-racial understanding. They could lead people into some harmful thinking, words, and actions. Here are five reasons why Jason Whitlock’s take on LeBron James and racism is wrong.

The bottomline of Whitlock’s perspective is that LeBron shouldn’t complain about someone scrawling the n-word on his home. James is rich. Racism is an “inconvenience.” No. Getting a flat tire is an inconvenience. Getting called a ni**er is not.

James may not have been physically harmed, but his house was specifically chosen and the sanctity of his home violated. James’s first concern was for his family. If someone could get this close to where his loved ones live then what might be next? Where can one be safe? That’s real pain. Don’t minimize it.

In criticizing James’s supposedly mild experience with racism, Whitlock also minimized the pain of every black person who has persevered through racism. According to Whitlock, only the materially destitute feel the true force of racism. I guess that makes every black person who lives above the poverty line a  snowflake when it comes to race? Nah, bruh.

It is true. Wealth the cushions impact of some forms of bigotry. But race and class are tied together in a Gordian knot. Whitlock’s basic case is that since LeBron James is rich, racism is simply an inconvenience. That’s malarkey. In fact, James’s wealth could make him a more obvious object of hatred. Sometimes being black and wealthy actually makes you a target of racism.

3) It makes the only kind of “real racism” the one that does bodily harm.

Nothing productive comes from arguing about whether someone’s pain is as “real” as another’s True, the scope and scale may be different, but trying to tell someone who is hurting that others are hurting worse doesn’t help either party.

Whitlock arguing that “real racism” is the kind that gets people killed or denies them jobs fails on at least two fronts. First, language creates the opportunity for action. Hate speech is not harmless. Alt-right websites that promote white supremacy boost the bravado of those who ultimately commit physical and fatal hate crimes. Just look at the murder of Richard Collins, III or the killer of the Emmanuel Nine.

Second, using a term like “real racism” doesn’t recognize the other ways racism kills. Someone calling you a ni**er is an attack on your dignity. It kills the healthy self-regard we should all possess. Racist words, even toward the wealthy, perpetuate stereotypes that continue to marginalize and oppress people of color.

Racism is real. Yes, it comes in degrees, but racism with the volume turned down is still real racism.

4) It completely misses the Emmett Till reference.

Whitlock thought James was making the graffiti on his gate equal to the pain Emmett Till and his family suffered. That’s not what James was saying. He was making a parallel about sharing pain publicly in the hope it might do some good. Mamie Till-Mobley made the courageous decision to have an open casket at her son’s funeral so the world could see what hate had done to her boy. She chose to bear her pain before the world with the aspiration that it might spark moral outrage and lead to positive change.

In a similar way, James chose to talk about this incident in a press conference so he could reveal issues of ongoing racism in America. He wanted to use this sad event to “keep the conversation going” and “shed light on light on us trying to figure out a way to keep progressing and not regressing.”

James did not, in any way, try to equate his experience of racism with Emmett Till’s. He was pointing to the fact that black resilience in the face of racism often means opening the door to your private anguish and trusting it will bring about some good.

5) It puts the focus on Whitlock’s antics and not racism itself.

As someone said recently, views like Whitlock’s are “profitable.” Whitlock’s opinion is ridiculous, but he’s good for ratings. This man is getting a lot of attention by making ludicrous comments about racism as a black man.

But all the responses on social media, and even this post, risk drawing undue attention to Whitlock’s comments and away from the real issue—racism itself.

We should pause occasionally to vaporize damaging views about race because there might be some folks out there who are tempted to believe them. But people who are truly concerned with equality and virtue shouldn’t take too long discussing Whitlock’s comments. There is more important work to do like lamenting with a man who just received a racial epithet and has to process it publicly.

Whitlock is a distraction. Let’s refute his views and get back to work.