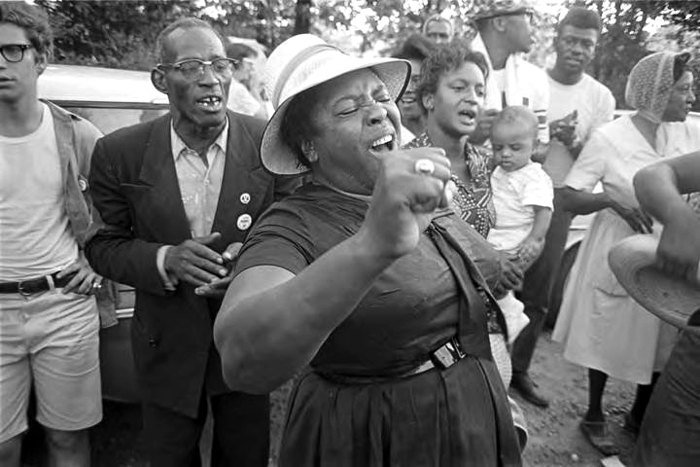 “I’m Not Backing Off”: Racism and the Undefeatable Faith of Fannie Lou Hamer

June 9 marks a grim anniversary in the history of civil rights. On that date in 1963, Fannie Lou Hamer, a poor sharecropper from Mississippi, endured a vicious beating orchestrated by white police officers.

Three books— The Senator and the Sharecropper by Chris Myers Asch, God’s Long Summer by Charles Marsh, and I’ve Got the Light of Freedom by Charles Payne— tell the story of that terrible night.

Hamer and several of her fellow civil rights workers were returning from South Carolina where they had spent a week training in an SCLC citizenship school under legendary organizer, Septima Clark. The bus ride had been uneventful, but the trouble began when they crossed the state line back into Mississippi.

When the bus reached Winona, they stopped to get some food and take a restroom break. They were met by several police officers who gave the group trouble. When Hamer, who had stayed on the bus, got off to investigate, the officers recognized her and put her in the back of a police car.

Where Nobody Could Hear the Hollering

The group was taken to the Montgomery County jail. Hamer thought the officers took them there instead of the city jail “so we could be far enough out, they didn’t care how loud we hollered, wasn’t nobody gon’ hear us.”

“They really wanted to make me say yes, sir, and that is the one thing I wouldn’t say.” For her refusal, they beat Ponder all the harder.

Then they took June Johnson, a fifteen year old girl who had begged her mother to let her go on the trip. Hamer relates what happened to the teenager.

“And after then…I hear some real keen screams, and that’s when they passed my cell with a girl, she was fifteen years old, Miss Johnson, June Johnson. They passed my cell and the blood was runnin’ down her face.”

Finally it was Mrs. Hamer’s turn. They reserved the most punishing treatment for her.

On the way to the cell where they planned to beat her, one of the officers said, “You b**tch, we gon’ make you wish you was dead,” Hamer recalled.

Five men were in the “death cell” as she called it. Three were white and two were black. This may have been the cruelest part of the unsavory affair. They forced the two male black prisoners to beat her with a leather-bound, heavy tool called a blackjack.

“You mean you would do this to your own race?” In case the black men lost their nerve, one of the officers said, “If you don’t beat her, you know what we’ll do to you.”

The description of the beating is best told by Hamer herself. In a statement given before the Select Panel on Mississippi and Civil Rights in 1964, she testified,

“I was carried out of the cell into another cell where there were two Negro prisoners. The state highway patrolman gave the first Negro a long blackjack that was heavy. It was loaded with something, and they had me lay down on the bunk facedown, and I was beat. I was beat by the first Negro until he was exhausted. After I was beat by the first Negro, the state highway patrolman ordered the other Negro to take the blackjack. The second Negro, he began to beat. The state highway patrolman ordered the first Negro that had beat me to sit on my feet. One of the white men that was in the room —my dress would work up because it had a large skirt, but I was trying to keep it down and trying to shield the licks from the left side because I had polio when I was a child. During the time that I was trying to work my dress down and keep the licks off my left side, one of the white men walked over and pulled my dress up. At this time I had to hug around the mattress to keep the sound from coming out.”

For an even more chilling account, listen to Hamer’s famed account before the Credentials Committee at the 1964 Democratic National Convention.

The brutalizing of three women speaks to the racialized, sexualized, performative terrorism perpetrated by white supremacists throughout American history. The ladies were targeted for the audacity of claiming their rights as citizens and humans. In the United States, people of color who dare to assert their own dignity and challenge notions of racial inferiority face hate that often turns physical. Fannie Lou Hamer’s beating left her with one kidney permanently damaged and a blood clot in her eye that nearly took her sight.

“She was abused, it seems, for being—for being a black woman with a voice,” wrote Charles Marsh.

The fact that they were women hearkens back to generations of sexual abuse heaped on black women since before the founding of the nation. Hamer’s grandmother, a slave, had twenty-three children. All but three were the result of rapes by a succession of white slave owners.

The spectacle of the beatings, done within earshot of the other prisoners and carried out by black inmates themselves served a purpose. By making a show of the savagery, the white racists inflicted psychological torture that tormented the victims long after the beatings stopped and the external wounds had healed.

While the viciousness of Hamer’s assault cannot be overstated, neither can her faith even in the midst of racism.

Faith Forged in the Fire of Injustice

What happened in Hamer’s heart afterwards is even more remarkable than what happened in the jail. Although the whipping left her body “hard as bone” so that she couldn’t lie down, her spirit emerged hardened for righteousness.

Hamer spent the night in silence, but day later, while still in jail she started to sing. Known for her resonant and inspiring voice, the same mouth that had been screaming in pain just the night before began sounding the strains of freedom.

“Paul and Silas was bound in jail, let my people go.

Had no money for to go their bail, let my people go.

Paul and Silas began to shout, let my people go.

Jail doors open and they walked out, let my people go.”

When Hamer hit bottom in her pursuit of justice, the sweet water of faith welled up in her soul. Belief in the Christian God of liberty and justice fueled her efforts and that of many civil rights activists. Hamer did not just keep her faith to herself, she vocalized it in her fight for justice.

As she was being released from jail, Hamer said to the white police officer who was with her, “Do you people ever think or wonder how you’ll feel when the time comes you’ll have to meet God?” She mused, “I hit them with the truth, and it hurts them.”

Today’s civil rights activists can learn from Hamer’s example of enduring injustice and emerging emboldened in her faith. While the Civil Rights movement of the mid-twentieth century was an avowedly black church-based phenomenon, current movement is less explicitly tied faith communities. Some view Christianity as a conservator of the status quo rather than a radical critique of it. Women like Fannie Lou Hamer challenge the thesis that religion is no longer relevant in the struggle for justice.

Belief in the basic equality of all individuals and the courage to resist oppression came from Hamer’s faith. That same faith can empower activists today. Far from encouraging people to wait until they die for a better life, Hamer’s beliefs led her to action. As she said in a speech at a church,

“Sometimes it seem like to tell the truth today is to run the risk of being killed. But if I fall, I’ll fall five feet four inches forward in the fight for freedom. I’m not backing off.”

For Freedom’s Sake: The Life of Fannie Lou Hamer by Chana Kai Lee

This Little Light of Mine: The Life of Fannie Lou Hamer by Kay Mills

The Senator and the Sharecropper: The Freedom Struggle of James O. Eastland & Fannie Lou Hamer by Chris Myers Asch

Local People: The Struggle for Civil Rights in Mississippi by John Dittmer

I’ve Got the Light of Freedom: The Organizing Tradition and the Mississippi Freedom Struggle by Charles Payne