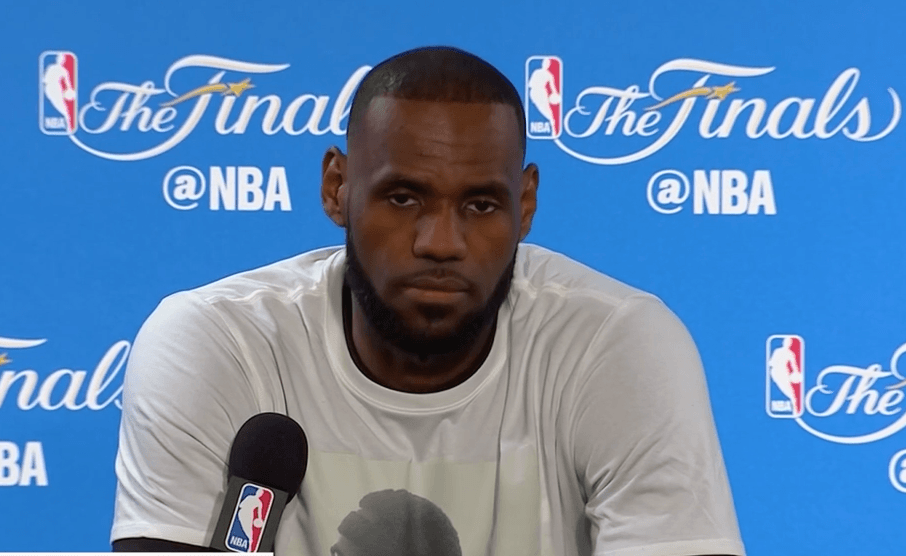 On the eve of the NBA finals conversations typically hover around how long the series will go, whether a certain player will come through in the clutch, and which sportscaster’s predictions will play out. But in an interview on Wednesday, the conversation veered from basketball to racism.

Someone scrawled the n-word across the front gate of a home in L.A. owned by LeBron James, the most dominant player in the league right now. He took a moment to address the incident in front of reporters. He expressed concern over his family’s safety and his longing to be face-to-face with his children to explain the situation.

What happened to LeBron James reminds us that no amount of success can shield black people from racism.

Even though James is already part of an ongoing debate about who is the G.O.A.T. (Greatest Of All Time) and he has been in every NBA finals series for the last several years, racism pursues him. And he’s not the only one.

Racism and the Obliteration of “Black Wall Street”

It is striking that the racism LeBron James experienced comes on the ninety-sixth anniversary of the Tulsa Race Riots. After World War I, the thriving Greenwood District became known as “Black Wall Street.” Between May 31-June 1, white rioters laid waste to the area and left dozens dead and hundreds injured.

As was typical in the days of Jim Crow, the violence started with a supposed sexual assault by a black man against a white woman. In what was likely an accident, a young black man came into contact with a young white woman in an elevator. A headline the next day read, “Nab Negro for Attacking Girl in an Elevator.”

Tensions escalated and a white mob soon began roaming the streets looking to expend their rage on black people. It is not happenstance that they targeted the part of the city that most clearly represented black prosperity. White supremacy has never been comfortable with black success.

The Legacy of Racism and Legendary Black Athletes

Transcendent black athletes, in particular, have been the focus of racism. Jack Johnson, the first African American heavyweight boxing champion, couldn’t even spar with white boxers let alone get a title fight against one. Only through his undeniable skills as an athlete did Johnson get a shot at the title against former champ, Jim Jeffries.

Commentators characterized “The Fight of the Century” in blatantly racial terms—a black man vs. the “Great White Hope.” In a competition scheduled for forty-five rounds, Johnson won in the fifteenth. At the end, the legendary boxer-turned-announcer, John L. Sullivan, said, “The fight of the century is over, and a black man is the undisputed champion of the world.”

White crowds met Jack Johnson’s victory with riots in over fifty cities across the nation that left at least 20 black people dead.

There are other examples. Jackie Robinson, the first African American in Major League Baseball, faced such strident racism that the city council of Philadelphia issued a formal apology in 2016. More recently Serena Williams, not only the best tennis player but one of the best professional athletes in recent history, has endured endless racially-tinged critiques and a baffling underestimation of her skills.

But it’s not just athletes who endure racism for their ascendancy. Robert Collins, III, a young black man set to graduate from Bowie State University in Maryland was stabbed to death by a white man. Although it has not been determined if this was a hate crime, preliminary investigations reveal that the killer interacted online with a white supremacist group called the Alt-Reich.

Collins had all the adornments of a young man who had worked hard and followed the rules for success in America. He was even set to be a 2nd Lieutenant in the Army. Neither his college education nor his service to the country saved his life.

Robert F. Smith, the founder and CEO of Vista Equity Partners, and one of just a handful of black billionaires worldwide, still faces discrimination. In an exclusive interview with the Washington Post, he said he refrained from putting his face anywhere on his company’s website because he might lose business. When he drives to the airport to board his private jet, he is wary of being pulled over.

“You shouldn’t have to be fearful of your life,” Smith said. “You should be able to drive to the airport and not be stopped three to seven times a year.”

Smith, like so many other prosperous African Americans, channeled his frustration over racism into more productive endeavors. His donation of $20 million made him the second largest donor to the National Museum of African American History and Culture (NMAAHC) in Washington D.C. Only another black billionaire, Oprah Winfrey, surpassed his gift.

It is not a coincidence, either, that on the same day LeBron James had to deal with racism, someone left a noose at the NMAAHC. As the American symbol for terrorism and lynching, the noose represents an attack on the dignity of black people. The NMAAHC is the first national museum dedicated to exploring the life and contributions to African Americans, and a racist act committed there is meant to diminish this historic achievement.

But the founding director of the museum, Lonnie Bunch, echoed the fortitude of African Americans throughout history when he responded saying, “We will continue to help breach the chasm of race that has divided this nation since its inception.”

LeBron James exhibited incredible maturity and character as he reflected on the racist graffiti defiling his home. He recalled the lynching of Emmet Till and Mamie Till-Mobley’s courageous decision to allow an open casket “to show the world what her son went through as far as a hate crime and being black in America.”

James went on to say that as long as his family is safe he wants to use this event to “keep the conversation going” and “shed light on light on us trying to figure out a way to keep progressing and not regressing.”

The racial slur used against LeBron James reveals a nation that has never fully embraced African Americans achieving a share in the American Dream. His experience demonstrates that no amount of stardom, wealth, or accomplishment can insulate a black person from racism in America. The lyrically intrepid rapper, Kanye West, said it well. “Even if you in a Benz, you still a n*gga in a coupe.”