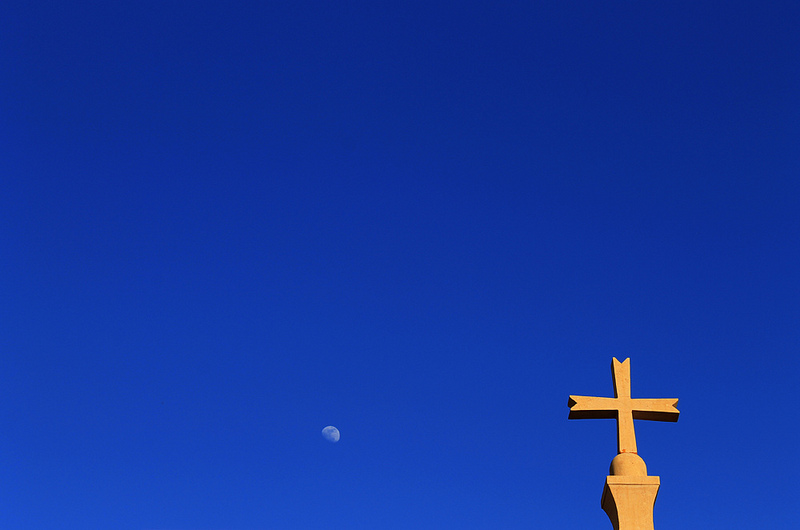 God’s Love and the Cross of Christ

Have you ever asked yourself whether God really loves you? And considered how you can know with certainty that he does? Current racial, political, and international turmoil swirling throughout the world might cause some to ask, “If God does love us, how do we know?”

Perhaps there are many answers to that question. But Romans 5:6-11 says God demonstrated his love toward us by offering his son Jesus to die on the cross for our sins, and by raising him from the dead, so sinners would be justified by faith, reconciled to God, and delivered from God’s wrath.

In Romans 5:6-11, Paul supports his preceding argument found in 5:1-5 that Christians have hope when they suffer. He introduces a reason for this hope in verse 5 when he says “because God’s love has been poured out in our hearts through the Holy Spirit who was given to us.” In 5:6-11, Paul provides an additional reason for hope: namely, Jesus’ death for sinners and his resurrection from the dead that guarantees future salvation from God’s wrath for those sinners for whom he died.

Paul introduces the death of Jesus in 5:6 with the words “Christ died at the right time for the ungodly while we were still weak.” He identifies the “weak” and the “ungodly” from 5:6 as “sinners” in verse 8 in order to specify that Jesus died for unrighteous people to accomplish their salvation. And these sinners, for whom Jesus died, are both Jews and Gentiles (Rom. 1:16-3:30). Paul emphasizes the uniqueness of Jesus’ death for the ungodly with the word “still” in 5:6. Jesus’ death for the ungodly happened while they were “still” sinners in a state of ungodliness, not when they were righteous.

In verse 7, Paul now clarifies the kind of death that Jesus, the righteous one, died for the unrighteous by contrasting Jesus’ ignoble death for sinners with heroic, patriotic, noble deaths in the ancient world. Ancient deaths were for a good or noble cause (e.g. Rom. 5:7). But in 5:6, Paul refers to Jesus’ death as a death for “ungodly” sinners. Unlike the kind of death mentioned in verse 7, Paul states in verse 6 and again in verses 8-10 that Jesus died for unrighteous people to achieve their justification, salvation, and reconciliation.

In Rom. 5:8, Paul explicitly mentions God’s love for sinners in association with Jesus’ death. He states “God demonstrated his own love for us like this: while we were still sinners, Christ died for us.” This statement echoes John’s remarks in John 3:16. Both John and Paul suggest God’s love is an action instead of a personal emotion.

In verses 9-11, Paul mentions a few of the benefits that his love achieved for us because of Jesus’ death: justification, salvation, and reconciliation. First, justification refers to God’s verbal declaration of not guilty. This declaration provides legal and divine exoneration for the sinners for whom Christ died (Rom. 1:18-3:20). The verb translated as “to justify” basically means to declare to be in the right, and God’s justification comes to the sinner by means of Jesus’ blood.

Justification by His Blood

Justification is primarily a future verdict in Romans that has invaded this present evil age (see Rom. 2:13; 3:20, 24; 5:1, 9). God offers this positive verdict in favor of those who have faith in Christ, against whom God has counted their transgressions (Rom. 4:6-8). In 5:9, Paul continues his thoughts from 5:1 about the present reality of justification for those who have faith in Christ, stating justification by Jesus’ blood results in future deliverance (e.g. salvation) from God’s wrath (see also Rom. 2:7-10; 3:21-26).

Reconciled with God by His Blood

Second, Paul states Jesus’ death accomplished reconciliation for those for whom he died (Rom. 5:10). Reconciliation refers to the friendship that now exists between God and the sinners as a result of Jesus’ blood acquiring justification. This friendship is applied to sinners by faith in Christ, because of Jesus’ death. And this friendship will serve as a means by which the reconciled friend will be delivered from God’s future wrath in the day of God’s judgment (notice verses 9-10).

Salvation by His Death and Resurrection

Third, in 5:9-10, Paul mentions salvation. Salvation, like justification, is primarily a future hope that has invaded this present evil age (Rom. 5:9-10). Although justification refers to one aspect of salvation, Paul’s reference to salvation with the words “will be saved” means future deliverance from God’s wrath. The phrase “from wrath” supports this very point in verse 9. The phrase “through him” in 5:9 asserts sinners will be delivered from God’s wrath through Jesus who shed his blood to accomplish justification, salvation, and reconciliation. The dead and resurrected Christ is the one through whom God accomplishes salvation for the ungodly and weak sinners (see Rom. 5:6, 8, 9-11; 6:1-11). And the wrath from which Jesus’ death and resurrection will deliver/save those for whom he died is God’s future wrath that he will pour out on the Day of Judgment upon the entire world (e.g. Rom. 2:7-10).

The combination of the justification of the ungodly, the blood of Jesus, reconciliation, and deliverance/salvation from God’s wrath through the blood of Jesus together with his death for the ungodly speaks to the substitutionary nature of Jesus’ death in 5:6-9. According to verse 6 and verses 8-10, the ungodly and weak sinners, who are enemies of God and who deserve the penalty of his wrath (2:7-10), will be delivered from it because Jesus died for them, because God raised Jesus from the dead (see also Rom. 4:25) and because faith links the ungodly to the benefits of the blood of Christ (4:24-25; 5:1, 6, 8-10). Paul’s remarks in 5:10 support the above interpretation when he states because of Jesus’ death and resurrection, those who were once enemies with God are now reconciled to God, and therefore will be saved by Jesus’ life and resurrection.

The ungodly sinners show their hostility to God by disobeying him, and God shows his hostility toward them by handing them over to his current wrath (1:18) and by reserving them for a future day of wrath (2:7-10; 5:9). But by faith in Christ, God’s enemies become his friends because God showed his love for sinners by offering Christ to die for their sins (Rom 5:8-10; see also John 3:16).

1. God has written every Christian a love letter, whose content is the death and the resurrection of Jesus from the dead. His death for sinners guarantees justification, reconciliation, and future salvation.

2. Jesus’ death for sinners proves that God loves us. And nothing can separate Christians from the love of God in Jesus Christ (cf. Rom. 8:31-39).

3. When we doubt God’s love for us, we should preach the Gospel to ourselves. When the devil tempts us to despair, and he reminds us of the guilt within, we should fight the devil off with the cross and resurrection of Jesus. We should kick the devil in the teeth with the bloody, resurrected-empowered, and exalted Gospel of Jesus Christ.

Christians, God has demonstrated his love toward us like this: while we were yet sinners, Christ died for us. Delight with joy in God’s love for his people. Amen.

2 thoughts on “God’s Love and the Cross of Christ”