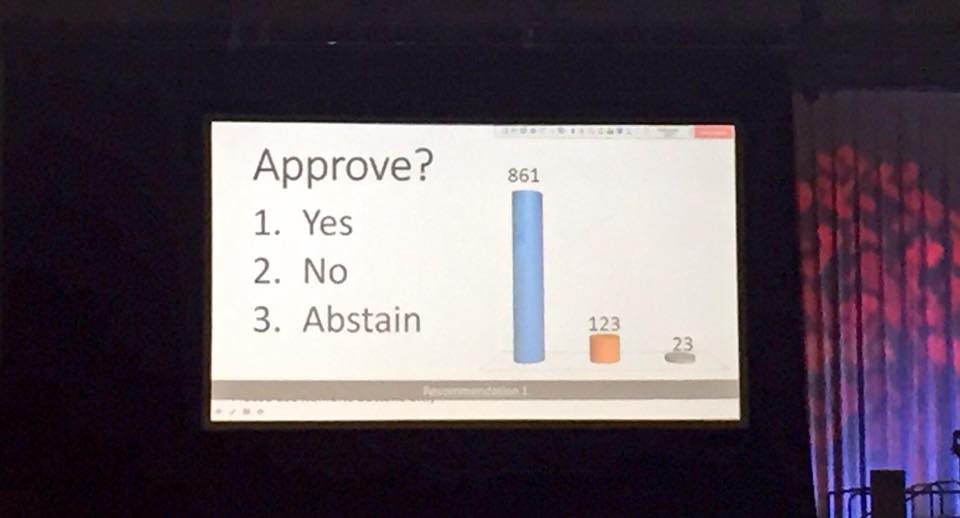 Theology How to be an Ally 101 Justice

The theme of the the Presbyterian Church in America’s 44th General Assembly was “Refreshed In and For the Cross.” For those present on the evening of June 23, 2016, it may have been one of the most refreshing times in the denomination’s history.

That night, Overture 43: Pursuing Racial Reconciliation and the Advancement of the Gospel*, passed by a vote of 861-123-23. The exact wording was a collaborative effort among church leaders and deserves quoting at length:

Therefore be it resolved, that the 44th General Assembly of the Presbyterian Church in
America does recognize, confess, condemn and repent of corporate and historical
sins, including those committed during the Civil Rights era, and continuing racial
sins of ourselves and our fathers such as the segregation of worshipers by race;
the exclusion of persons from Church membership on the basis of race; the
exclusion of churches, or elders, from membership in the Presbyteries on the basis
of race; the teaching that the Bible sanctions racial segregation and discourages
inter-racial marriage; the participation in and defense of white supremacist
organizations; and the failure to live out the gospel imperative that “love does no
wrong to a neighbor” (Romans 13:10)

The full statement and the amendment.

Here are a five reflections on the overture on racial reconciliation I have as a black member of the Presbyterian Church in America.

Other statements on racial reconciliation have been made (see below), but this one is different because it deals with the Civil Rights era. The PCA formally addressed slavery almost a decade and a half ago, but it failed to mention anything about the much more recent and close-to-home issue of the Civil Rights Movement. Overture 43 corrects that defect and says, “during the Civil Rights period, there were founding denominational leaders and churches who not only failed to pursue racial reconciliation but also actively worked against it in both church and society.” This is important because many members of the denomination had fathers, grandfathers, uncles, and other relatives who were alive during this important stage of America’s history and are implicated in maintaining the segregated and unequal status quo. Passing Overture 43 demonstrates a willingness to adhere to biblical principles even if they put one at odds with family.

2.  This Makes It Easier for Ethnic Minorities (at First)

The problem with not having an explicit statement repudiating racism, especially during the Civil Rights Movement, as a Southern Presbyterian denomination is that African Americans and other ethnic minorities will always wonder, “Are these folks still cool with racism?” That’s putting it bluntly, but there’s truth to it. As a black person in an overwhelmingly white branch of the church, I have to constantly evaluate whether I’m truly welcome here or not. A strong statement repenting, not just of racism generally, but the more recent lack of vocal support for racial equality during the Civil Rights Movement, is necessary because silence about the matter tacitly communicates either support or indifference. Now I can confidently say that the PCA is both aware of and remorseful for its historic connections with racism, especially from the mid-20th century to the present. But having this overture in the records only helps at first. The actual lived experience of ethnic minorities in churches and presbyteries will prove whether the denomination is truly ready to make room at the table for historically under-represented groups.

Honestly, we’ve had statements and pastoral letters about racism and reconciliation before (here and here, for example). The common criticism is that those efforts remain just words on a page without improving diversity, equity, and inclusion for ethnic minorities. But this latest effort might break the pattern. Overture 44: “Creation of the PCA Unity Fund” states, “Therefore be it resolved, that the 44th General Assembly create a fund to be known as “The PCA Unity Fund” to help raise up future generations of godly, reformed African American and other minority Ruling and Teaching Elders…” This overture proposes a simple but essential principle. If a denomination truly wants to increase ethnic diversity, it’s going to take money. The Unity Fund provides tuition support for minorities to attend approved seminaries, expenses for minority Teaching and Ruling Elders to attend the annual General Assembly, and funding for historians to “to explore the role that Reformed minority pastors and theologians have played in our country’s history.” Individuals and churches voluntarily contribute to the fund, so it remains to be seen how much support will be available, but the Unity Fund provides a structural support for increasing ethnic diversity in the PCA.

Overture 45 forms a racial reconciliation study committee. Not another study committee! Yes, but this one is different. It’s nice to have previous statements on slavery and racism, but this overture recognizes that, “while helpful, [these efforts] have not sufficiently resulted in the increased ethnic diversity and participation at all levels of our denomination.” So Overture 45 forms a committee not just to study the issue but to provide concrete, practical steps for individual churches and the denomination. The goal is to make sure that twenty years from now, we aren’t still seeing a denomination whose membership and involvement resembles the America of the 1950s rather than the 21st century. With the personnel who have been recommended for the committee, we can look forward to some helpful suggestions, but it remains up to each presbytery and congregation to make the commitment to real change.

4. People in the Majority Still Need to Grapple with Corporate Sin

Many have asked, “Who are the 123 who voted against the overture racial reconciliation?” First, it’s not accurate or charitable to label those 123 elders in the church as racists. I can’t say why they all voted against the overture, but it could be anything from a desire for an even more detailed statement to pressing the wrong button on the clicker when the voting started. But I can say some people object to the idea that an entire denomination should or even can repent of racism. Each person is responsible for his or her sins only, so the argument goes, and it is not possible nor biblical for a denomination to repent as a body. All people involved in the denomination are not racists and no one is accountable for the moral decisions of another person. Refuting that argument is an entirely different post. I will simply say that we are a denomination that holds the idea of being a “covenant” people very closely. God deals with His church both individually and collectively. We have no problem claiming as our own the contributions of a long line of Reformed theologians and church leaders. Yet when it comes to their failings and blindspots, we suddenly become individualistic. Furthermore, the sin of racism operates both through acts of commission and omission. It doesn’t take an individual or group engaging in overt acts to incur guilt for racism, all it takes is inaction in the face of injustice. For that we, as a denomination, acknowledge our complicity in racism and repent of it.

5. We Must View This Neither Pessimistically nor Optimistically, but Realistically

Two reactions typically follow statements from Christians on racial reconciliation. The first is pessimism. “This is a meaningless gesture that won’t do anything to actually change the status quo.” The other reaction is optimism. “This is it! We’ve finally arrived. We will never go back to the benighted days of the past.” Both pessimism and optimism are the wrong reaction to the overture on racial reconciliation. The gospel teaches us to be neither cynically hopeless nor unrealistically positive. It acknowledges that sin means we will always struggle with racism in one way or another. No amount of willpower or words will change the fact that sin will always be present on this side of heaven. At the same time, heaven has broken into this reality in the form of Jesus Christ. As Christ-followers, we have been freed from sin’s power and no longer have to conform to the pattern of this world. We have the hope of a future freed from sin and its effects and we have hope right now that we have put off the old self and can live in the newness of a Spirit-empowered life.

The overture on racial reconciliation will not abruptly change the culture of an entire denomination. Anyone who thinks otherwise is ripe for disappointment. At the same time, approving this statement makes a statement. It says to people both within and outside the PCA that we stand against racism in all its forms and commit ourselves to solidarity with other image-bearers across racial and ethnic lines. My hope is that this overture will set us on a course to increase ethnic diversity and participation in the denomination in the near future. This should be used as an opportunity to go back to our individual churches and press the issue of racial reconciliation. Every elder and member of the Presbyterian Church in America is in the midst of a moment that can catalyze a movement for racial justice in the church. Let’s use this historic event to lean into the chance for change. Let’s be bolder than we’ve ever been to work for concrete transformation in the way we think, speak, act concerning race relations. We won’t see many moments like this in our lifetime. If we don’t agitate for change now, then when will we?