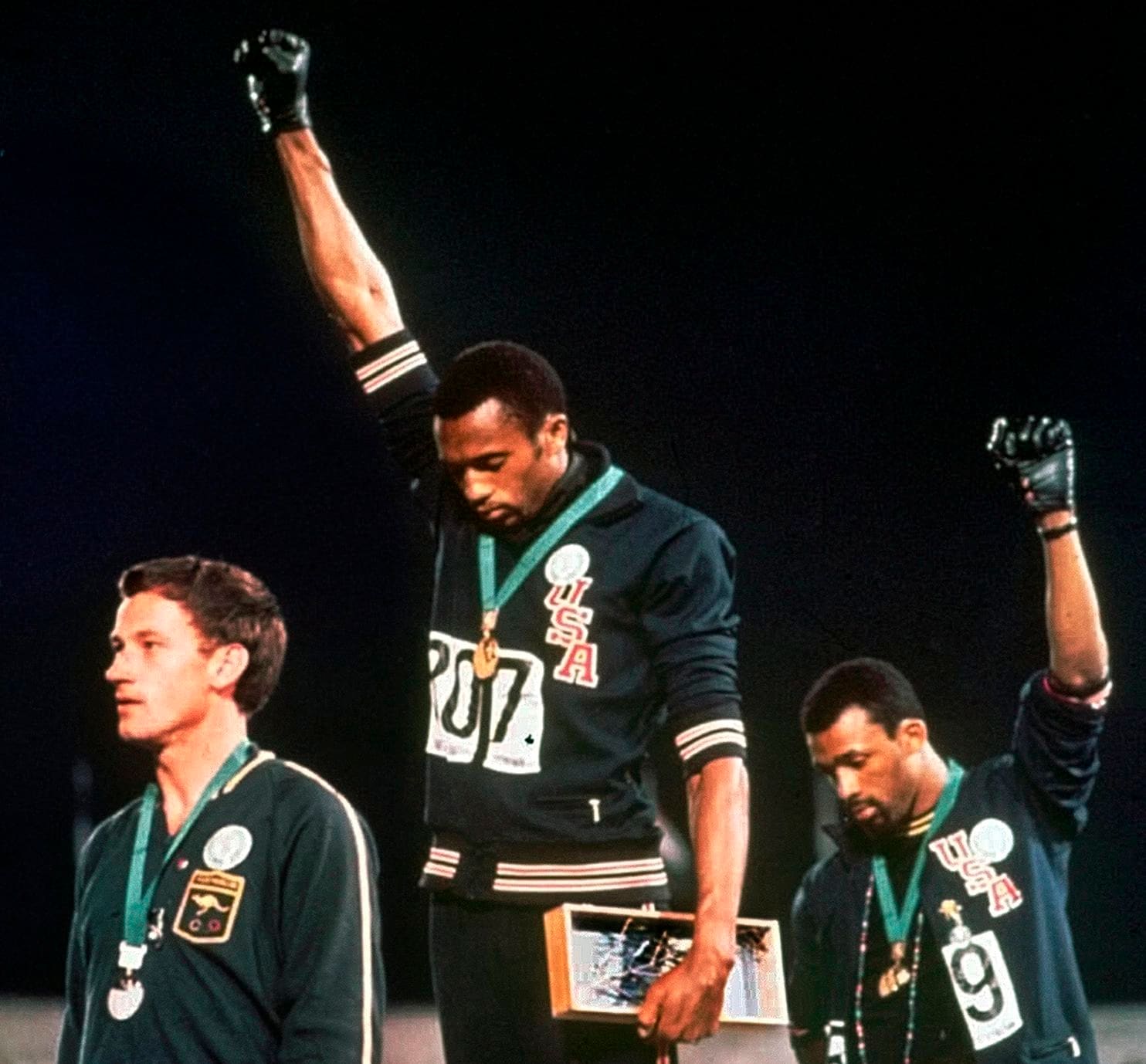 The Race for Humanity: The Tommie Smith and John Carlos Story

If you’ve ever analyzed the iconic picture of Tommie Smith and John Carlos at the 1968 Summer Olympics in Mexico City, one of the intriguing things you notice—besides the proud, black-gloved fists held high—is they’re standing on the podium, shoeless, in black church socks.

Those familiar with the history of this iconic, and at the time, highly controversial, moment, know that this was a conscience, intentional, and symbolic decision by Carlos and Smith, much like every other decision that led to the heavily historicized photograph.

For Smith, the foundations of his protest originated with his childhood faith. “I saw things in the Bible that prompted questions. I read that everyone is equal in God’s eyes, that we are children of God, that we serve him as one, thus no one is better than another,” Smith stated in his autobiography years later. But it still baffled him at a young age why his family “went to a black church and whites went to a white church.” Smith’s questions were answered well before he stepped foot on the winner’s podium in Mexico City.

The seeds of protest were deeply rooted well before John Carlos assumed his posture of protest in 1968. As a teenager, John walked and talked with Malcolm X on the streets of Harlem. He observed the effects of Malcolm’s words on the African-American community firsthand.

X used his words and vigor to encourage Black people to not be ashamed of who they were, nor the color of their skin. He insisted they embrace the inherent worth of personhood they held. By the time John Carlos reached college at East Texas State University to run on the track team, he was determined to not solely be defined as an extraordinary sprinter. This drive enabled Carlos to challenge the way his track coach treated him and his teammates. It once resulted in his coach swinging a hammer at him out of anger. Regardless, Carlos demanded respect for himself, his family, and his teammates.

Because of their experiences throughout childhood and college, Carlos and Smith almost didn’t compete in the 1968 Olympic Games. But it wasn’t because they weren’t fast enough to qualify. On the contrary, they were among the fastest sprinters in the world. At the time, civil rights were the dominant force shaping the ideas for the majority of Black America and abroad and there was talk of a potential boycott of the ’68 games.

John Carlos first caught wind of this potential protest while running track in Texas. He read of Tommie Smith, Lee Evans, and Dr. Harry Edwards’ reasoning for why they couldn’t—not wouldn’t—run in the Olympic Games. They couldn’t “just run in Mexico City like everything was hunky-dory, when there was so much racism in the United States Olympic committee and U.S. society as a whole…could bring gold and glory to a country where so much of Dr. King’s dream was deferred…the individual glory of stardom had to wait until we had real justice at home.” These grievances gave birth to the Olympic Project for Human Rights.

Various other events played a role in the organization of a potential boycott and the formation of the OPHR. Uprisings in Detroit and Newark set the cities ablaze in the summer of 1967. Muhammad Ali was stripped of his title the same year for refusing to fight in the Vietnam War. Avery Brundage, who once praised Hitler’s Nazi regime at a rally in Madison Square Garden, was the sitting head of the United States and International Olympic Committee. South Africa (Rhodesia at the time) was still an apartheid state and was invited to the games.

The OPHR demanded Brundage be removed as head of the IOC and USOC, Rhodesia be disinvited from the games unless they abolished apartheid practices, and the title be returned to Ali.

Unfortunately, OPHR’s demands were not fulfilled and support for the movement fizzled. But the biggest blow to the boycott efforts came in April 1968, when Martin Luther King, Jr. was assassinated. The leader of the Civil Rights movement fully supported the OPHR’s endeavors and was content in endorsing Dr. Harry Edwards as its leader.

MLK’s assassination and the constant governmental and societal assaults proved too much. Without widespread support, Tommie Smith and John Carlos were now determined to run in the Olympics, if not for anything but to make a statement for Black excellence on a platform they could create for themselves.

Both runners qualified to run in Mexico City for Team USA. There, they qualified for the finals in the 200-meter dash, but it looked as if Tommie Smith might not be able to race after straining his groin muscle in the preliminaries. But he, along with Carlos, entered the blocks. Smith ran a world record-breaking time of 19.83 seconds. Peter Norman, who represented Australia, inched ahead of Carlos the last few meters to take the silver medal, leaving Carlos with the bronze.

A Protest for Human Rights

From the beginning, Smith and Carlos planned to medal together and agreed to use the medal ceremony as a stage to represent America’s past and present, the beautiful and the ugly. They wanted to use the power of symbolism, rather than just words, to communicate a message they believed the world should see.

Their black gloves represented strength and unity. The beads hanging from their neck represented the history of lynching in America. And their feet, covered only by black dress socks, symbolized the poverty that still plagued so much of Black America.

They were immediately booed out of the stadium and the disapproving masses quickly imposed a narrative that contrasted the protest’s intent. Some claimed Smith and Carlos were displaying their allegiance to the Black Panther Party. Others said they were militants who were deliberately disrespecting the flag and the country. Sports commentator Brent Musburger called Carlos and Smith “black-skinned stormtroopers.” False reports that Smith and Carlos had their medals stripped circulated as well –a scare tactic to discourage other athletes from following their example.

Today, the gesture is still described as a Black Power salute by historians and publications and it is still widely circulated they were stripped of their medals. But Tommie Smith wants it known today, just as he did in 1968, that their protest was one for Human Rights, not just for black athletes who didn’t like what was happening in their country, and they still have their medals.

It’s clear to see where the lines of history parallel 1968 and today. Colin Kaepernick is still jobless due to the collusion by the NFL, banning him for his decision to humbly protest injustices against minorities in America. But considering the overt attempts of silencing and ignoring athletes who are “political,” it’s more likely these lines are not paralleled, but a continuum of the same structures who prefer silent pawns for profit over living agents for justice.

Instead of simply railing against the unjust powers that be, however, we’d do well to first heed the words of the most famous Jew in history and consider what we might do in light of the many inequities we experience or see.

The love of Yeshua compels us to use our light as an influence for evangelism that extends beyond only preaching the gospel. We may not find ourselves on a stand, symbolically making known the hidden evils of our culture; nonetheless, we are light and salt to a dark and decaying world, a world plagued with exploitation, oppression, and repression. Our light extends into our offices, classrooms, weight rooms, churches, and local coffee shops.

Carlos and Smith epitomize the ability we all possess when we sprint toward the finish line with gospel optimism. Our incentive is to see a broken world come to its knees in worship of the one, and only, King of justice and righteousness who is worthy of our crowns and medals.

Beyond the bowed heads, tightly held black-gloved fists, vertical arms, and medals around their necks, at the very least, Carlos and Smith took the medal stand to represent “the least of these.” Yes, they embodied athletic excellence. But they also dignified and personified the underrepresented and voiceless people of America at great cost to their own comfort and fame. Whatever it may cost us, Tommie Smith offers his take on a better way of excellence that transcends fame and :

“I just thank God that I’m not popular and I’m alive, so I can continue to at least listen and learn and help out wherever I am…I’ve helped athletes out by not telling them, ‘The white man is bad…’ What I tell them is that people are people, give them a chance to prove themselves wrong, regardless of color. Shake that white man’s hand and go on down the line, because he’s human also. Look at him in the face, talk to him like he is a human being because he is. Let him show his racist tendencies; see if he believes some of the things that are racist. If he believes such things, then you talk to him about why he’s saying them. We all need education. The tendencies of racism come from the systems long before us, and we don’t know where they all came from or how long they have been developing and taking root.”