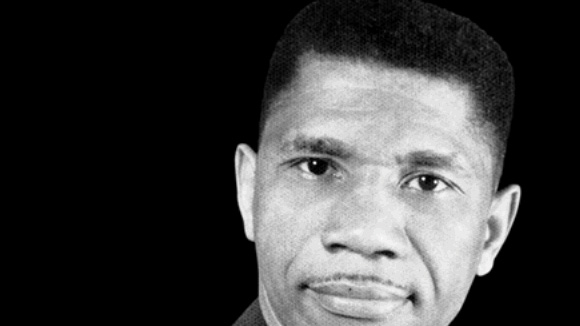 “Turn Me Loose!”: The Assassination of Medgar Evers

The bullet that killed Medgar Evers didn’t stop in his chest. It ripped through his body, through the wall of his home, and lodged in the refrigerator inside where his wife and three children were still awake. Fortunately, the Evers family had trained for just such an occasion. They immediately dropped to the ground for cover. Unfortunately for Medgar Evers, when he dropped to the ground he would never get up again.

June 12 marks the anniversary of the assassination of Medgar Evers in 1963. Evers served as the field secretary for the N.A.A.C.P. in Mississippi during the heyday of the Civil Rights movement. On the night he was killed, he was returning from a strategy session to determine how to release the remaining activists who had been imprisoned in Jackson for demonstrations. In his hand he held sweatshirts that said, “Jim Crow must go.”

Born in Decatur, Mississippi in 1925, Evers had always been an activist. In 1944 he stormed the beaches in Normandy. Frustratingly, he survived a vicious, bloody battle on another continent only to die at the hands of a citizen in his own country. When he came back, he did as W.E.B. Du Bois had written—he returned fighting. In 1946, along with his brother and a few friends, Evers tried to register to vote in Mississippi. They were turned away and followed home by a shotgun-wielding white supremacist. Evers was also the first African American to apply to the University of Mississippi, but officials rejected him because of his race.

Evers became the field secretary for the Mississippi branch of the N.A.A.C.P. in 1954 to help with organizing in the wake of the Brown v. Board decision. After the lynching of Emmett Till, he dressed up as a field hand to gather eyewitness accounts. The Mississippi movement had been persistent but lacked unified leadership until Evers came to the helm. He championed cases like helping get James Meredith admitted to the University of Mississippi and organized economic boycotts.

In death, Evers finally got a small portion of the honor he deserved in life. Since he was a veteran, the Army buried him with full military honors in Arlington cemetery. His wife, who is still alive, said of her husband,

“Medgar was a happy man with a rich smile and a warmth that touched many people. He was never too busy to listen or too tired to help. But beneath that gentle sympathy lay strength that could not be intimidated. Lord knows, enough people tried. But it never worked and that, I suppose, is why they killed him.”

Evers’s murderer, Byron De Da Beckwith, stood trial twice in 1964 for the murder of the civil rights activist. All-white juries acquitted him both times. For most of the next thirty years, he enjoyed life as a free man. In 1994, though, lawyer Robert DeLaughter presented new evidence that De La Beckwith had committed the crime. This time De La Beckwith stood condemned. He earned a life sentence that he served until he died in 2001.

A book and movie resulted from the dramatic proceedings of the murder trial and eventual conviction of Byron De La Beckwith. The film Ghosts of Mississippi details the trial in cinematic form. Maryanne Vollers authored a book by the same name and told the inside story of how prosecutors finally convicted Beckwith.

Artists Respond to the Murder of Medgar Evers

The murder of Medgar Evers initiated responses from a number of artists and pop culture figures. Bob Dylan wrote a song called, “Only a Pawn in Their Game” that presented poor whites like De La Beckwith as the marionettes manipulated by white racists with power and money to stoke racial hatred. One verse of the song says,

The deputy sheriffs, the soldiers, the governors get paid

And the marshals and cops get the same

He’s taught in his school

From the start by the rule

That the laws are with him

To protect his white skin

To keep up his hate

So he never thinks straight

‘Bout the shape that he’s in

But it ain’t him to blame

He’s only a pawn in their game

~ Bob Dylan, “Only a Pawn in their Game”

Nina Simone, famed for using her art in service of the civil rights movement and black pride, penned the bluntly honest, “Mississippi Goddamn” partly in response to Evers’s assassination. While she names Alabama and Tennessee in the song, Mississippi garners the top spot for racial intransigence and the frustration it caused

You don’t have to live next to me

Just give me my equality

Everybody knows about Mississippi

Everybody knows about Alabama

Everybody knows about Mississippi Goddam

More recently, the film, I Am Not Your Negro, directed by Raoul Peck details James Baldwins’ thoughts after living through the murders of three of his friends—Evers, Malcolm X, and Martin Luther King, Jr. None of the three leaders lived to see the age of forty, and Evers was killed first. Reflecting on the crime, Baldwin said,

“The blue sky seemed to descend like a blanket and I couldn’t say anything. I couldn’t cry. I just remembered his face—a bright, blunt, handsome face—and his weariness, which he wore like his skin. And the way he said “row-odd” for “road.” And his telling me how the tatters of clothes from a lynched body hung flapping in the tree for days. And how he had to pass that tree every day. Medgar. Gone.”

~ James Baldwin, I Am Not Your Negro

Activism is a Family Affair

It is not insignificant that Medgar Evers’s wife and children witnessed his murder. Their presence at their father’s violent death testifies to the reality that activism involves the whole family. They were caught up in the consequences of his public crusade against injustice. But instead of debilitating them, the tragedy fueled more action. Myrlie Evers-Williams continued to agitate for equity and eventually became the chairman of the N.A.A.C.P. To this day she serves the cause of truth and equality.

At the funeral of her husband Evers-Williams reflected, “Mornings are the worst time. He always came home late, and he often came to bed without awakening me. Every morning, automatically, when I awakened, I would reach out and touch him, and he would always be there. Now, in the mornings, I still reach out.”

Hate doesn’t respect the boundaries home and family. Malice invades a sanctuary and violates the peace of anyone in it. Activists must consider whether they are willing to bring their loved ones into the fray with them. Chasing justice is a family affair.

Ever the fighter, Evers’s last words as he was being transported to the hospital were, “Sit me up. Turn me loose.”

Medgar Evers’s death and, even more so, his life force today’s citizens to contemplate serious questions. What sort of stand for justice, in this day and age, might get someone killed? How much would a person have to push against the status quo that his or her life might literally be at risk?

Martyrdom is not the goal. Persecution is not an end in and of itself. The struggle for justice, however, will always bring risk. How often have people retreated from righteousness because they failed to exercise of the courage of a Medgar Evers?

Perhaps remembering his fortitude and the sacrificial love of his family will inspire a new generation to say, “Turn me loose!”

I Am Not Your Negro (film)

Never Too Late: A Prosecutor’s Story of Justice in the Medgar Evers Case by Bobby DeLaughter

The Autobiography of Medgar Evers: A Hero’s Life and Legacy Revealed Through His Writings, Letters, and Speeches by Myrlie Evers-Williams

Ghosts of Mississippi: The Murder of Medgar Evers, the Trials of Byron De La Beckwith, and the Haunting of the New South  by Maryanne Vollers