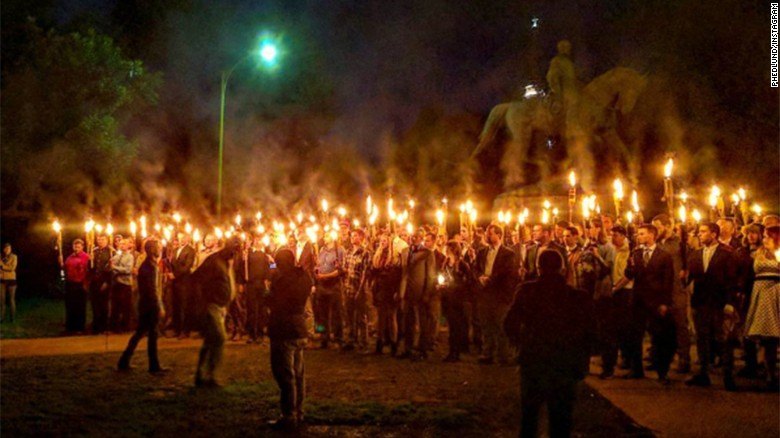 Charlottesville is an hour away from me. I’ve visited several times, attended a few college basketball and football games, and even preached in a few churches in the area. So when I saw the recent pictures of a “protest” led by white nationalists and held around a statue of Robert E. Lee, it was infuriating, but also scary. This was in my backyard.

Dozens of men and women, both young and old, carried fire torches, cried out for white supremacy, and shouted nationalist statements. The pictures of the protest reminds of a kind of KKK rally, but there were no hoods among this crowd; there were no white robes or red crosses; no rifles or horses.

Instead, the burning torches of fire carried by these protesters lit up their unashamed white faces in the night for everyone to see. History reminds us this is no new phenomenon; as the seemingly immortal photographs of yesterday captured the faces of those who stood by at lynchings and participated in violent opposition to the Civil Rights sit-ins and marches.

In an attempt to suppress the present discussion on race and racism, many Christians and non-believers neglect the racial issues of today by claiming it isn’t as bad as previous periods in history. Therefore such events are largely ignored. Some progress has indeed been made. But in light of Charlottesville, black bodies being slain by police officers, and the presence of white nationalists in Washington D.C., you can conclude that racism’s, in its most explicit forms is still very much among us.

White nationalism and white supremacy is not being resurrected, it’s being exposed. Want proof? Threaten to move a statue.

The protest also was frustrating because of why it was happening. The issue of whether or not confederate statues should be torn down or left alone is another article for another day. I personally think if confederate history is to be told in monuments and statues, more statues should be built that tell the entire story and point to the gruesomeness of slavery for which these lionized men fought. The narrative needs to be changed. I drive by several of my city’s own confederate statues regularly; one is even across the street from my church. Depending on the day, having to literally look up at these figures draws a sense of ire, especially before I worship a God who opposed many of their convictions.

There are people all around who would seek to defend these figures and their legacies, as if they have no bearing on my life and the lives and families of many others. Dozens of people who I potentially pass in the supermarket, wave to, and allow my child to interact with at the park, could be willing to light torches and cry out for white supremacy. This is vexing. Confederate figures and white supremacy are so boldly supported and defended. This is vexing. Each day the narrative of white supremacy is promoted and proclaimed is another day where the narrative of the oppressed is silenced.

Even more frustrating is the fear that comes from knowing that many of these protesters will cross paths, and even interact with black people and other minorities in the coming days. Some of them may have attended church with African-Americans the very next Sunday. Some may be co-workers, teachers, or students. Unfortunately, it’s possible that most of these protesters believe that they don’t have a racist bone in their body. They may believe they simply want to “preserve their heritage” as they stand with burning torches and chants of white supremacy.

The irony is while the indifference and hatred is so explicit, it’s still somewhat veiled. This is what is so scary. The protesters are unafraid to show their faces, but they will blend in with the majority of society the minute their torches die down – in our cities, churches, offices, and our government. These protesters will most likely continue their lives, unaffected by the implications of their racism, and will ultimately never be confronted by minorities, or more importantly, anyone who looks like them.

This is why Christians, black and white, must continue to directly confront racist ideologies and incidents. Minorities will continue to be enraged and disheartened at the sight of this protest, and will continue to discuss and confront the sin of racism often to the silencing of the majority.

But to my white brothers and sisters, here is an opportunity to confront the sin of racism in one of its most glaring forms and speak to those who would otherwise never be confronted.

Paul says in Ephesians 5:11, “Take no part in the unfruitful works of darkness, but rather expose them.” When it comes to the issue of racism in our society, it is not enough to refrain from taking part in it. It is not enough to simply not be racist. As God’s people, we must expose this unfruitful work of darkness that is racism and confront it boldly and unashamedly as children of light.

To my brothers and sisters, if you seek to be empathetic towards people with different skin and different experiences than yours, then like these protesters, I encourage you to show your faces as well. But unlike them, show your faces in standing for equality and speaking against racial injustice. Instead of the burning torches of white supremacy, let the blazing light of the truth of God’s word, the truth of the Imago Dei, and the reality of His racism-conquering sacrifice shine brighter, and expel the darkness of racism and racial superiority.

The pictures captured of this Charlottesville protest vividly show us the pervasive power of sin never confines itself to certain time periods. It is always rearing its head in both the hearts and systems of fallen people. To this, God has chosen a people from every race, tribe, language, and nation to be imitators of Him, to be children of the light (Eph. 5:1, 7-13), driving out the darkness of sin through exposing its repulsiveness in the sight of God.

While moments such as these invoke fear and frustration, God has both called and equipped His people to confront the sin of racism by speaking prophetically to it, proclaiming God’s justice, the equality of those made in His image, and the sacrifice He paid to crush all sin, including racism.

4 thoughts on “The Charlottesville Protest: Frustrations, Fear, and Exposing Racism”