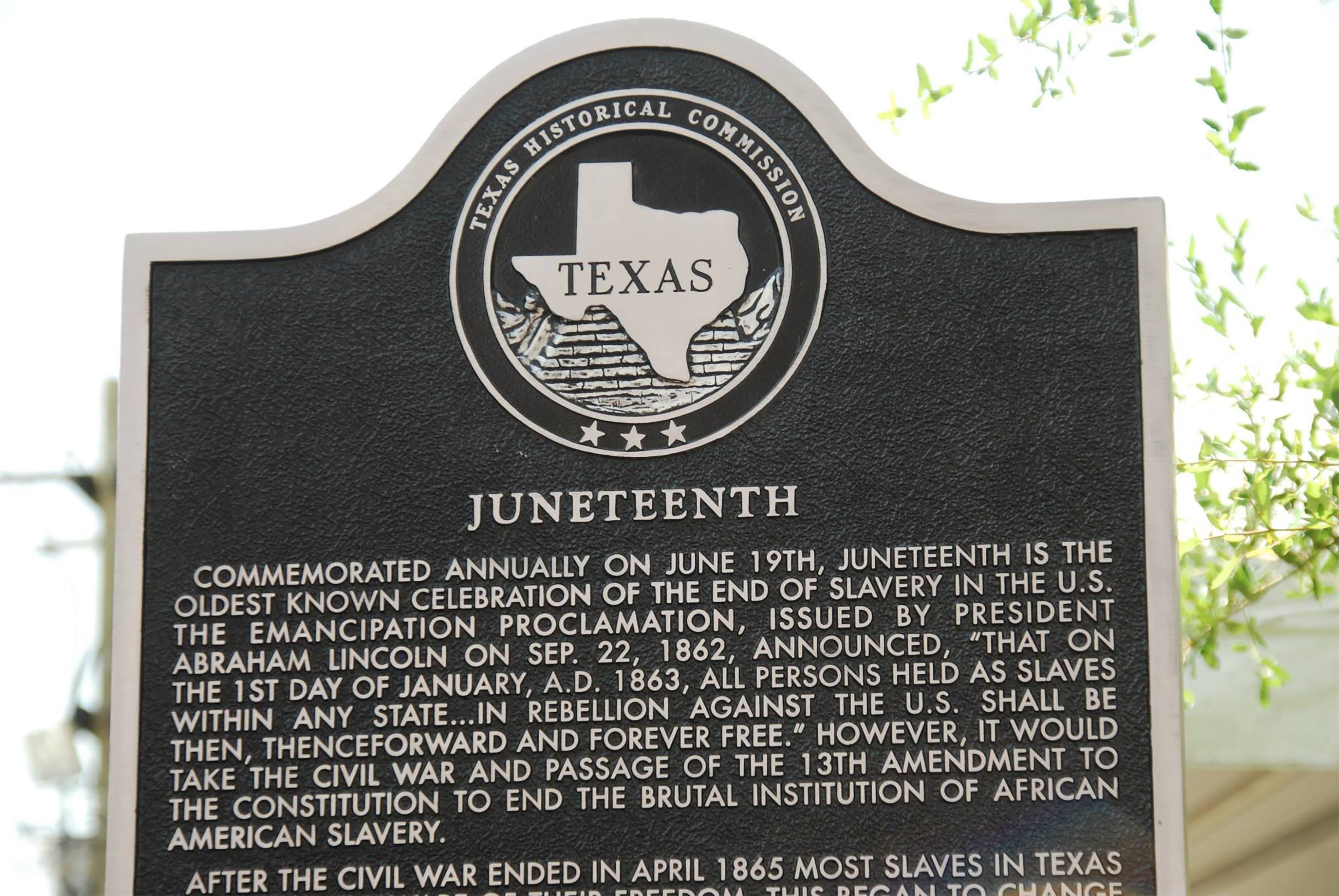 Juneteenth is the oldest celebration of the end of slavery in the United States. It is recognized on June 19th every year. In Texas, where it is a state holiday, slaves learned of the Emancipation Proclamation on June 19, 1865, two and a half years after the initial announcement.

A broadside, or poster, announcing freedom to slaves said,

The people of Texas are informed that, in accordance with a proclamation from the Executive of the United States, “all slaves are free.” This involves an absolute equality of personal rights and rights of property between former masters and slaves, and the connection heretofore existing between them becomes that between employer and hired labor.

A Marker in Texas

“Commemorated annually on June 19th, Juneteenth is the oldest known celebration of the end of slavery in the U.S. The Emancipation Proclamation issued by President Abraham Lincoln Sep. 22, 1862, announced, “that on the 1st day of January A.D. 1863, all persons held as slaves within any state…in rebellion against the U.S. shall be then, thenceforward and forever free.” However, it would take the Civil War and passage of the 13th Amendment to the Constitution to end the brutal institution of African America slavery.

After the Civil War ended in April 1865 most slaves in Texas were still unaware of their freedom. This began to change when Union troops arrived in Galveston. Maj. Gen. Gordon Granger, commanding officer, district of Texas, from his headquarters in the Osterman Building (Strand and 22nd St.) read ‘General Order No. 3’ on June 19, 1865. The order stated, “The people of Texas are informed that, in accordance with the proclamation from the executive of the United States, all slaves are free. This involves an absolute equality of personal rights and rights of property between former masters and slaves.” With this notice, Reconstruction era Texas began.

Freed African Americans observed ‘Emancipation Day,” as it was first known, as early as 1866 in Galveston. As community gatherings grew across Texas, celebration included parades, prayer, singing, and readings of the proclamation. In the mid-20th century, community celebration gave way to more private commemorations. A re-emergence of public observance helped Juneteenth become a state holiday in 1979. Initially observed in Texas, this landmark event’s legacy is evident today by worldwide commemorations that celebrate freedom and the triumph of the human spirit. (2014)

A Virtual Tour of the NMAAHC

For even more historical context enjoy this virtual tour of the National Museum of African American History and Culture (NMAAHC) with museum director, Lonnie Bunch. He specifically discusses emancipation, its causes, caveats, and effects.

Read a transcript of the entire Emancipation Proclamation, declaring freedom for slaves in certain areas of the South, in full here.

The Thirteenth Amendment formally abolished slavery nationwide. It was ratified in December 1865. The full text reads:

Section 1.
Neither slavery nor involuntary servitude, except as a punishment for crime whereof the party shall have been duly convicted, shall exist within the United States, or any place subject to their jurisdiction.

Section 2.
Congress shall have power to enforce this article by appropriate legislation.

The documentary film, 13th, records the failed promise of full freedom for citizens of African descent in the United States. Watch the trailer below and the full documentary on Netflix.

Juneteenth matters because in the United States freedom  has always come with an asterisk. While the founding documents of the nation declare “all men are created equal, that they are endowed by their Creator with certain unalienable Rights,” not all people were free and not all people enjoyed their unalienable rights. White supremacy asserted its power through the institution of race-based chattel slavery. The legacy of this heinous practice continues into the present. America has still not fully gripped the devastation slavery caused for both the enslaved and the free.

Celebrating Juneteenth gives citizens the opportunity to remember the ways freedom has always been circumscribed for people of color and it serves as motivation to press for continual emancipation from all forms of slavery.

One way to celebrate Juneteenth is to make sure it becomes a day that all Americans commemorate. Sign the Color of Change petition to make Juneteenth a national holiday.

Previous Post
Pass The Mic: SBC, Alt-Right, and Condemning White Supremacy
Next Post
Suggested Resources on Race and our History for the Presbytery of the Mississippi Valley

3 thoughts on “What Is Juneteenth?”