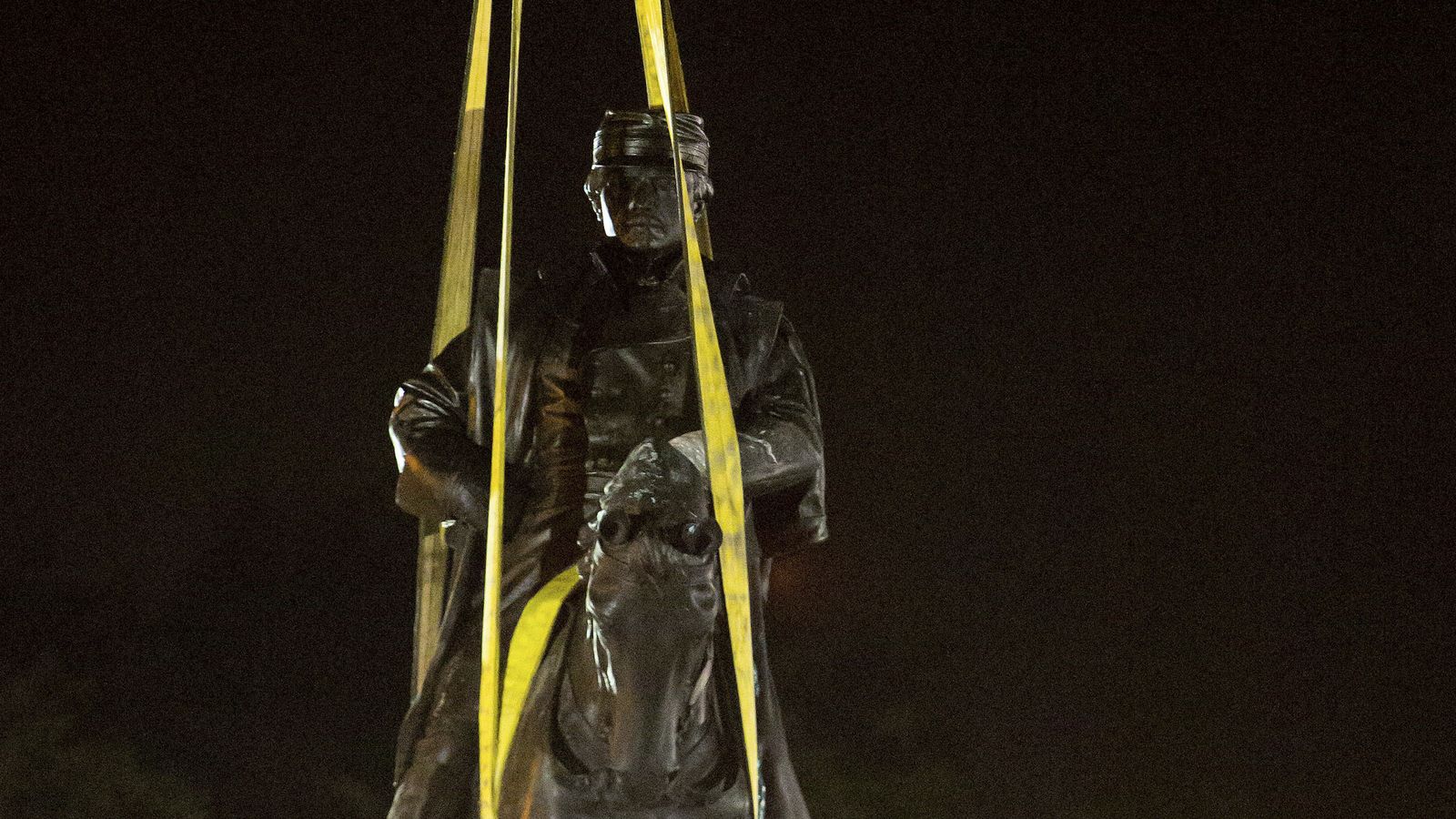 What the Church Can Learn from Taking Down Confederate Monuments

Officials across the South have decided to remove Confederate monuments in several cities amid heated rallies and demonstrations.

In New Orleans, the city council voted to remove four monuments prominently displayed in the city. The contractors who removed the statues had to wear masks and flack jackets under the cover of night due to threats from people protesting removal of the monuments.

In Charlottesville, Virginia people opposed to removing the Confederate monuments staged a rally in which they came assembled around the monument at night carrying torches. Although no masks were visible, the gathering immediately brought forth recollections of Ku Klux Klan rallies.

The efforts to remove symbols of the Confederacy were partly spurred by the slaying of the Emmanuel Nine by a white supremacist in Charleston, South Carolina in 2015. Church members in a Bible study at the historic Emanuel AME church welcomed a young white man into their group. At the end of the study he stood up, pulled out a gun and started shooting. The investigation that followed revealed the young man in pictures where he proudly displayed the Confederate flag.

In the aftermath, a loud national outcry compelled the South Carolina legislature to finally remove the Confederate flag from the statehouse grounds. Other cities and even some historic universities began questioning the appropriateness of symbols that honored the defeated Confederacy and its defense of race-based chattel slavery.

The church has much to learn from taking down Confederate monuments. More churches have committed themselves to racial reconciliation and diversity. Part of that process means rooting out the sin of racism within the church. Although many pastors and other church leaders have given vocal support to the idea of reconciliation, they often struggle to act decisively to remove the manifestations of bigotry in their congregations. Here’s what removing Confederate monuments can teach believers about reconciliation in the church.

1) Rooting Out Racism Is a Long Process

In New Orleans, the debate about Confederate monuments dates back to at least 1981 when city leaders tried to remove the an obelisk erected to commemorate opposition to integration. Although in 2015 the city council passed a 6 to 1 resolution to remove the monuments, it took many contentious conversations to get there.

In the same way, church leaders can expect long and intense debates among their elders and congregation members before generating enough agreement to make public gestures toward racial reconciliation. Even convincing one group of people, like key leaders, doesn’t mean immediate action can take place. The congregation has to learn why racism is a matter of biblical principle through sermons, Sunday School lessons, guest speakers, intentional community and more. Awareness about racial and cultural bias in the church and moving against it will take time.

2) The Time is Always Right to Do Right

As much as city leaders sought to gain support for removing Confederate monuments and symbols, they never had complete consensus. Officials in New Orleans kept the date and time of the monument removals secret for fear of reprisals from their opponents. The Confederate flag came down in South Carolina in the middle of vocal defiance of the decision. Yet come down they did.

3) Opposition Comes with the Territory

As city leaders have learned, there will never be complete unanimity around race or the Confederacy. Some people will always view any attempt to remove these symbols of offense as an affront to their heritage. They will also attack anyone who tries to remove such symbols.

Leaders who want to maintain unity by appealing to moderation will be unsuccessful in their attempts to root out racism from the church. Racism is, in and of itself, divisive. It apportions greater or lesser value to groups of people based on arbitrary physical features or simple differences in culture. Those who adhere to racist ideas will cling to them. There is no moderate way of tolerating their beliefs. There is no moderate way of dealing with sin.  Conflict will come with any attempt to uproot racism.

But it shouldn’t take a tragedy to turn the tide against racism. Why did it take the murder of nine black people in a Bible study for some people to finally reject the racism associated with the Confederate emblem? Why do people have to literally be killed before we confront racial prejudice? Christian leaders should be able to challenge racism in the midst of the church without waiting for a public disaster as an entry point to conversation.

Most people pass by monuments in their cities and have little awareness of the significance of those symbols. But when a person pauses to learn when the monument was erected and why, the romanticizing of racism becomes apparent. But this process of awareness can’t take place without a corresponding awareness of history.

Many churches, especially in the South or on the Atlantic coast, were built by slaves who couldn’t even worship in the building their own hands had constructed. Other churches that existed during the Civil Rights era of the twentieth century were involved in sins of omission or commission during the struggle for the basic dignity of African Americans. They may have prevented interracial groups from worshiping in their congregation or they have have prohibited people of color from becoming members in their congregation. It is a worthy work to delve into history of one’s own congregation to see if there is any unclean thing regarding racism.

Watching Confederate monuments being removed by large cranes is a literal picture of what it looks like to remove an idol. The ugly rage that protesters displayed was a sign that the Confederacy had become an idol to them. People cling to their idols and attack anyone who threatens them. Removing idols is hard work because it is heart work.

Unseating the idol of racism from the church will be difficult because it is not a battle against flesh and blood. It is a spiritual battle that requires spiritual armor and spiritual battle. Church leaders who want to engage in this melee’ should be prepared for a desperate fight against principalities that seek to divide and disrupt the people of God. But if the leaders of earthly cities have taken on the challenge, how much more those who stand to inherit the City of God?