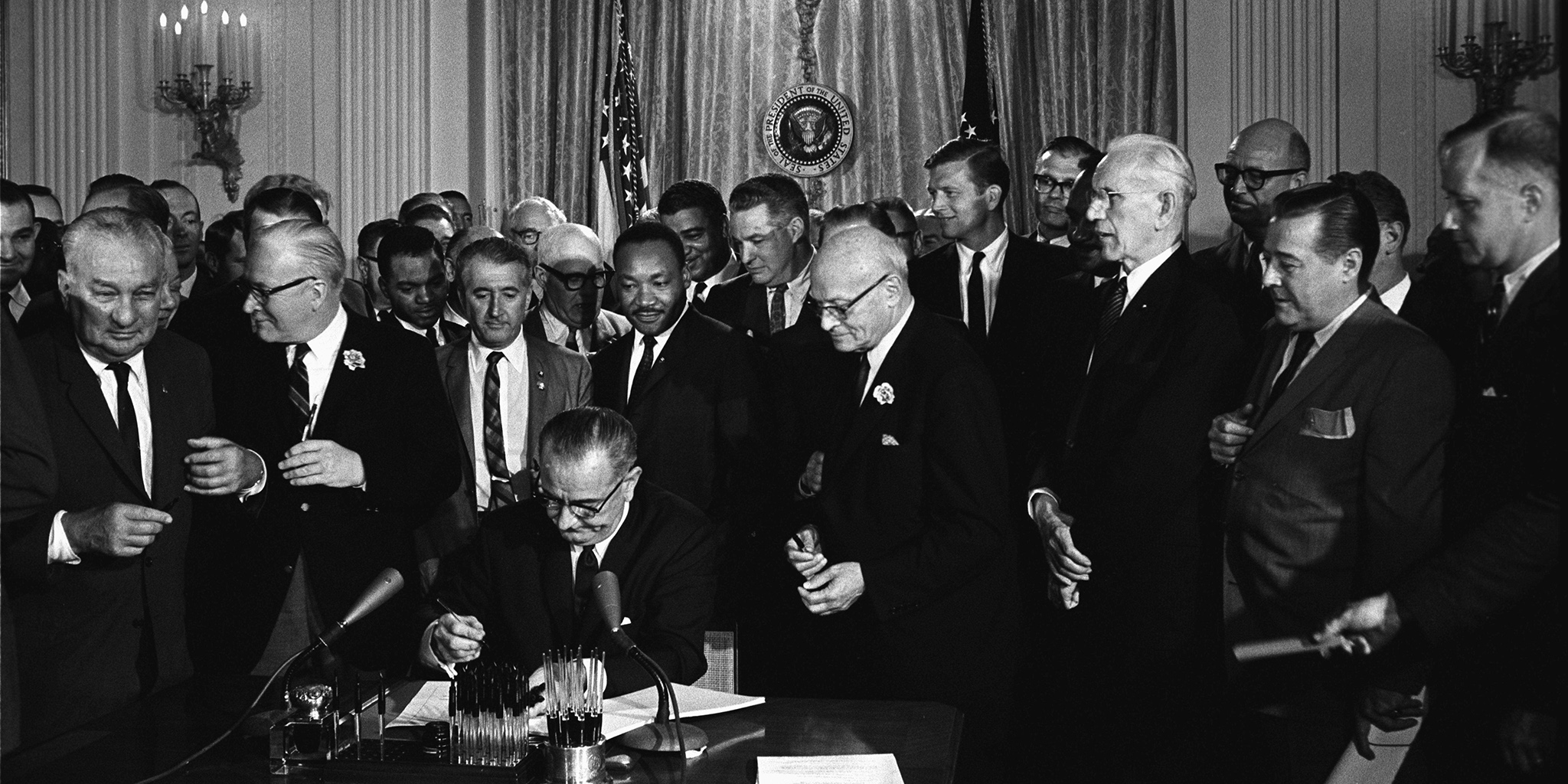 50 Years After the Civil Rights Act

On July 2, 1964, President Lyndon B. Johnson signed the Civil Rights Act into law. Historians have suggested that this piece of legislation was one of the most significant civil rights victories in U.S. history. This new law made discrimination based on race, religion, sex, or ethnicity illegal. As a result, segregated schools, jobs, public facilities, and any other expression of de jure segregation were eventually banned. President Johnson signed this piece of legislation into law approximately 14 years prior to my birth. And I have benefited tremendously from it.

As an African-American with a multi-racial background, I am overwhelmed with gratitude to God for using audacious and ordinary people from a variety of races to fight for civil rights and for making the Civil Rights Act a reality. One of the many reasons for my gratitude is I received four degrees from the Southern Baptist Theological Seminary (Southern), a former segregated institution, at which I would have been forbidden to study during the era of segregation. My thanksgiving to a sovereign God, who both predestined segregation and who brought it to its crashing end, is currently intensified as I presently occupy an office in Norton Hall 142 as an associate professor of New Testament Interpretation at Southern—a miraculous dream come true! The 50th anniversary of the Civil Rights Act in 2014, therefore, causes me to pause, reflect, and to thank God for using ordinary people to change the racial landscape of theological education in the U.S. , through one of many historic acts of legislation related to racial justice. The Civil Rights Act granted to me, to so many other African-Americans, and to other ethnic minorities educational privileges, for which many races fought and died.

Before the Civil Rights Acts

Theological education for African-Americans and ethnic minorities, prior to the Civil Rights Act was limited.  Many theologically conservative evangelical seminaries simply would not admit African-Americans, and they refused to educate them because of their white supremacist and racist views. Instead, competent and intellectually gifted African-Americans with the financial means enrolled into theologically liberal seminaries and divinity schools in the north. A critical legal obstacle for Southern on the issue of segregation was Kentucky’s Day Law, which prohibited white and black students in the Commonwealth from sharing classroom space. Several Southern Seminary faculty members endeavored to bypass this law through creative measures. They met with black students in their offices as part of their Negro Extension Department in the 1940s. From this program, Garland Offutt became the seminary’s first black student to receive the Th.M. degree in 1944, and in 1948, the first black student to receive a Th.D.

However, only a revisionist historian would argue that segregation in theological education was limited to theologically conservative and evangelical institutions and that African-Americans were without exception welcomed with open arms at liberal leaning and progressive seminaries and divinity schools in other parts of the U.S. In 1960, James Lawson, an African-American student at Vanderbilt Divinity School, was asked to withdraw from the divinity school because he was involved in the civil rights movement in Nashville.  But he refused. The university’s request and Lawson’s defiance sparked national debate. On the one hand, the divinity school desired to be a symbol of progressive Christianity in the middle of the protestant and theologically conservative south. But, on the other hand, the institution’s impulse to ask Lawson to withdraw from the divinity school was the kind of racial injustice that ran rampant in the south, in many theologically conservative and evangelical churches and seminaries.

I tremble when I think what would have become of my life if I would have been born prior to the Civil Rights Act or if the act never became part of U.S. law. Needless to say, I would not be a Southern Baptist and I certainly would not have been able to study, or currently be able to teach at Southern Seminary. I am humbled to think that I have benefited tremendously from the shed blood of many African-Americans and other races , who risked their lives for civil rights, in ways that they were not able to benefit because of the side of U.S. history in which they lived.

For example, I became the first African-American member to join the Southern Baptist congregation of Hindman First Baptist Church—a once segregated church—in Hindman (an extremely racist part of Eastern Kentucky) in 1996. Under the leadership of Pastor Michael Caudill, that beloved and majority white congregation overwhelmingly showered me with the love of Jesus Christ, helped me spiritually, and financially enabled me to pursue theological education when I announced my call into the ministry in 1997. In addition, the church provided numerous opportunities for me to help discern my call and to use my spiritual gifts—including the gifts of preaching and teaching. And the church has been, and continues to be, a beacon of light to members of my family who continue to live in the area.

As a multi-racial, African-American New Testament scholar teaching in a core theological discipline in the oldest school (the school of theology) at the flagship and once segregated Southern Seminary, I am regularly moved with emotion and deep gratitude to my great God, the Father, and my Lord, Jesus Christ, when I think that there was a time in history when I would not have been allowed to study at this great institution, and certainly not allowed to teach here. Almost daily, God overwhelms me with his good and smiling providence to me on this side of the Civil Rights Act  when I step foot on this historic campus and teach our gifted students, who are red, yellow, black, white, and consist of many different races, tongues, tribes, and nations. Yes, there is still much work to be done in the area of racial reconciliation in many evangelical and theologically conservative institutions.  African-Americans and ethnic minorities continue to experience discrimination in many educational contexts in the U.S. However, both the reality of current, and the hope for future racial progress and racial reconciliation in theological education appear very promising to me.

African-American enrollment in Southern Seminary’s graduate programs is higher than it has been in approximately 20 years. The institution’s student body consists of ethnic minorities from many different races, tongues, tribes, peoples, and nations. In addition, Southern currently has more African-Americans teaching on faculty than any other time in the institution’s history. These racial victories are due firstly to the cross and resurrection of Jesus, and secondly to the Civil Rights Act.

However, despite of the contribution made by this landmark piece of legislation for racial justice and integration, evangelical and conservative theological institutions must remember that the Civil Rights Act has only taken us so far and cannot take us any farther. Although this act emancipated African-Americans and ethnic minorities from the slavery of legalized discrimination, this act has not and cannot successfully lead us into the promised land of gospel-centered racial reconciliation. In fact, there are theological institutions that now use the Civil Rights Act in a reverse discriminatory way, by discriminating against the white majority in order to meet a certain African-American/minority quota, which is no less racist than the widespread legalized segregation that the Civil Rights Act sought to eradicate in the segregated south. Reverse discrimination is the same racist problem from the 1950s and the 1960s, but it is expressed in a more sophisticated way; namely, by means of the promotion of diversity instead of the promotion of gospel-centered racial reconciliation, which will lead to diversity if intentionally acted out in the appropriate way in both churches and in society, by ethnic majority and minority ambassadors of the gospel.

Certainly both institutional and structural racism are still realities, and indeed God uses laws like the Civil Rights Act to serve as a means, by which he affects racial justice and social transformation in society for the good of all humanity. Yet, the Civil Rights Act did not end racism and it cannot create racial reconciliation, because it is incapable of changing depraved human hearts that are inclined toward sin, and alienated from God and humanity. Only the gospel of Jesus Christ acted out in the real world by gospel-believing ethno-racial groups can create God-breathed and Spirit-filled racial reconciliation in evangelical and conservative theological institutions and in evangelical and conservative churches.

To be clear, I thank God for the Civil Rights Acts! Without it, I would not have the freedom to write this piece or to teach at my beloved Southern Seminary! But only the gospel of the bloody, crucified, resurrected, and exalted Jewish Messiah, Jesus Christ, acted out by God’s people in church and in society is able to save Jews and Gentiles and to lead theologically conservative evangelical institutions safely onto a sure theological foundation into the promised land of God-centered, Christ-exalting, and Spirit-filled gospel-centered racial reconciliation in theological higher education. Ultimately, the racial reconciliatory gospel of Jesus Christ, bought by his very own blood, and secondly the Civil Rights Act are the very reasons why this multi-racial African-American can offer words of thankfulness and reflections of the Civil Rights Act.

Previous Post
A Tough Mind and a Tender Heart : Relevant Words from MLK, Jr. about Ferguson
Next Post
How Ferguson Leads Us “Back to the Bible”

3 thoughts on “50 Years After the Civil Rights Act”