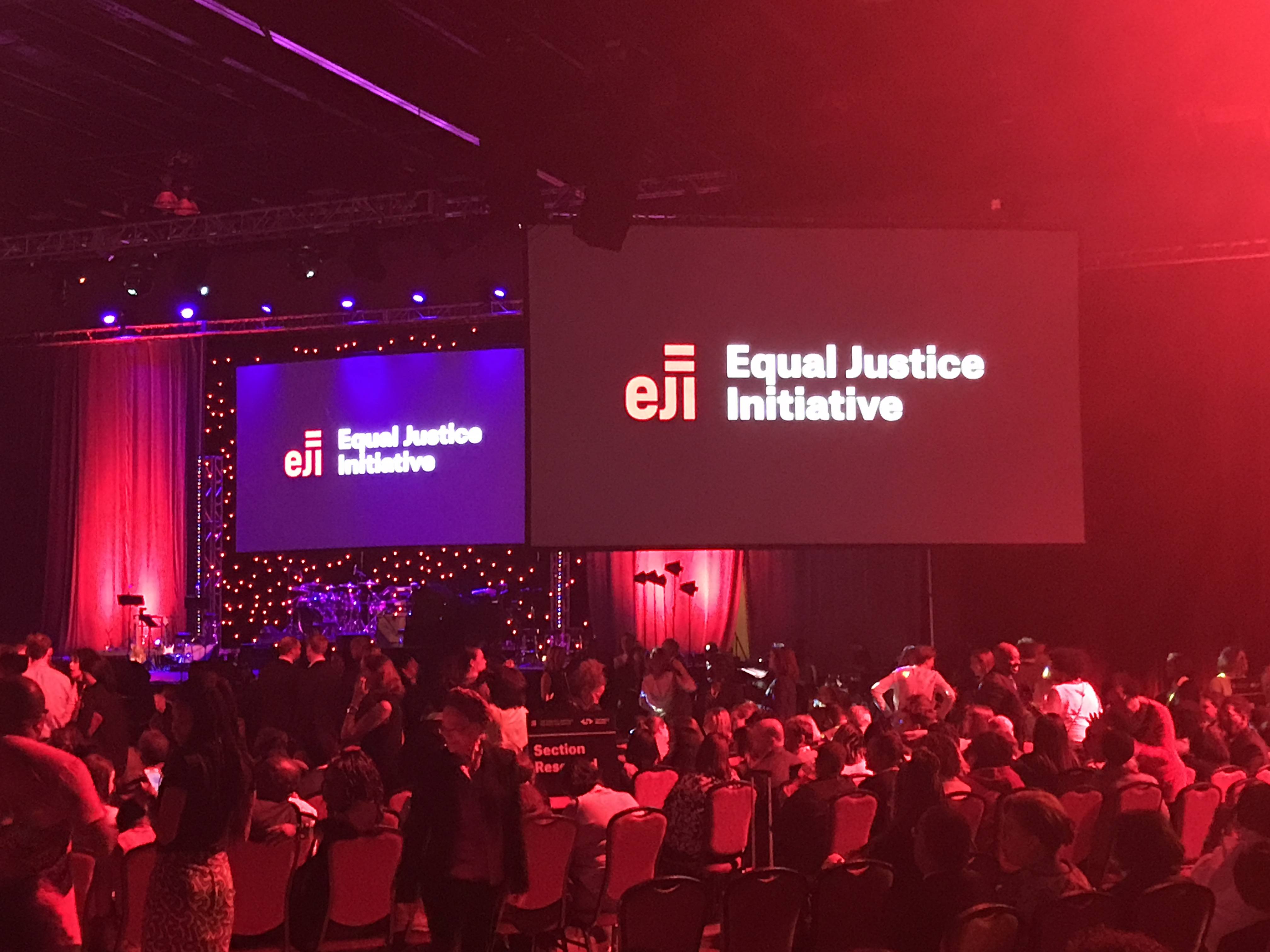 Montgomery, AL– Bryan Stevenson and his team at the Equal Justice Initiative capped off the grand opening of the Legacy Museum and National Memorial for Peace and Justice with an evening filled with honoring heroes past and present as well as soul from deep within the black tradition.

After several other acts and speakers, a standing ovation greeted Bryan Stevenson when he finally took the stage. Before he articulated the significance of the memorial and the museum he gave honor to those whom it was due. First, he recognized the women and men who put hammer to nail and shovel to dirt to build the monument. “Because there can be no justice without labor,” he said as he asked them to stand and be recognized.

Stevenson also paid homage to a pantheon of civil rights crusaders. They included renowned preacher C.T. Vivian, Claudette Colvin, the under-appreciated woman who refused to give up her seat on the bus in Montgomery months before Rosa Parks, the Rev. Jesse Jackson, and many others.

The evening ended with soulful  performances from Bebe Winans and Patti Labelle. The entire event felt like a long, engaging, and varied sermon, but when BeBe Winans came on it felt like church. Before beginning his second song he warned the audience, “I might as well apologize right now because I’m gettin’ ready to have a good time. ‘Cause when I think about the goodness of the Lord…!” His sentence faded into song.

Then Ms. Patti, who somehow has not aged a day in the past thirty years, closed out the night with her unmistakable voice. Owning the stage she began with a somber rendition of Sam Cooke’s, “A Change Is Gonna Come.” After that, interspersed with the energetic flapping of her arms like bird’s wings, she sang “Somewhere Over the Rainbow” and hit notes that flew through the ceiling.

The ceremony began on a more subdued tone, though. At the start of the night, a pair of black women lamented in the words of a Negro spiritual, “Lord, how come me here? I wish I never was born.” Images on the screen showed a slave mother asking the crowd if they had seen her two children. The mother disappeared and the two children—alone against a black background and dressed in ragged clothing—inquired into the ether, “Momma?”

Then, MacArthur Award winner and actress, Anna Deavere Smith, guided the audience of thousands through a evening of brief yet profound speeches and rich musical selections. The assembly burst to its feet as Smith announced a special recorded video from “my president, Barack Obama.” The 44th President said, “To remember and reflect on our long history of racial violence

should make us uncomfortable.” Cataloging American racial atrocities such as lynching, the black codes, and segregation, Obama explained that, “These tragedies are part of our history, and no matter how painful that truth is, it helps us recognize the mistakes we’ve made so that we don’t repeat them.”

The next politician to take the stage marched alongside Martin Luther King, Jr. on many occasions, including Selma, where a police officer fractured his skull with a billy club. John Lewis encouraged his listeners to continue the struggle for civil rights and justice. “There are forces today trying to take us back, but they will not take us back. We will build a new and better America.”

According to Lewis, people have to be willing to endure suffering for the sake of justice. And he spoke from experience. “I was arrested forty times in the 1960s. I’ve been arrested another five times since I’ve been in Congress,” and with as grin he said, “And I’ll probably be arrested again for something else before I’m done.

The scarred civil rights veteran outlined his rationale for activism. “My philosophy is simple. When you see something that is not right, not fair, you have to stand up and do something—to get into good trouble, necessary trouble.”

Afterwards, award-winning director Ava Duvernay came to the stage and quoted a lengthy passage from a 1975 speech given by Toni Morrison, “Nobody really thought that Black people were inferior…They only hoped that Black people would hear coon songs, disparaging things, and would weep or kill or resign, or become one.” The solution, said Duvernay, once again intoning Morrison, is to focus on the root causes of racism. “You don’t waste your energy fighting the fever; you must only fight the disease. And the disease is not racism. It is greed and the struggle for power.”

Just before the two crooners, Winans and LaBelle, enveloped the assembled crowd in soulful sounds, Bryan Stevenson inhabited his role as preacher and storyteller. “Stay on the side of love,” he exhorted. “It’s love that can teach us that no one is illegal…It’s love that can teach us that opposite of poverty is not wealth, the opposite of poverty is justice.” And he implored that the Legacy Museum and memorial not simply be a monument but provide fuel for a movement.

If the feeling of sorrow, hope, and urgency that the opening ceremony evoked persists, a movement may indeed be afoot.

Previous Post
I Thought My Wife Wasn’t “Woke”
Next Post
Interview with Dr. Frank A. Thomas about Black Preaching (PTM 202)